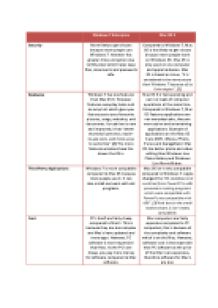 ﻿Windows 7 Enterprise Mac OS X Security More likely to get viruses because more people use Windows 7. However has greater drive encryption due to BitLocker which helps keep files, documents and passwords safe. Compared to Windows 7, Mac OS is less likely to get viruses because more people work on Windows OS. Mac OS is only used on one computer and apple hardware. Mac OS is based on Linux, ?it is considered to be more secure than Windows 7 because of its Unix origins?. [1] Features Windows 7 has less features then Mac OS X. ...read more.

Example of applications on the Mac OS X are iDVD, iMovie, iPhoto, iTunes and GarageBand. Mac OS has better photo and video editing than Windows Live Photo Gallery and Windows Live Movie Maker. Third Party Applications Windows 7 is more compatible compared to Mac OS because more people use it. It can also install and work with old programs. Mac OS isn?t very compatible compared to Windows 7. Apple changed the ?OS codebase and switched from PowerPC to x86 processors making programs which were compatible with PowerPc not compatible with x86?. [3] And due to the small market share, it isn?t really compatible. Cost PC?s itself are fairly cheap compared to Mac?s. ...read more.

However, software cost is less expensive than PC software as the price of the Mac?s are expensive, therefore software for Mac?s are less. Search Windows has a search called Windows search. You can find nearly anything on your PC incredibly fast. You can find files, documents, photo?s, songs, video?s etc. To search on Mac OS X you have to use a search called ?Spotlight? which is a desktop search feature. It is an index of all items and files on the system. It is designed to allow people to quickly find files, items. Specific words in documents and in web pages can be searched. [4] [1] Available from - http://www.ghacks.net/2011/08/08/windows-7-enterprise-security-is-better-than-os-x/ [2] Available from - http://windows.microsoft.com/en-GB/windows7/products/features [3] Available from - http://www.itpro.co.uk/635602/head-to-head-mac-os-x-10-7-lion-vs-windows-7/10 [4] Available from - http://en.wikipedia.org/wiki/Spotlight_(software) ...read more.