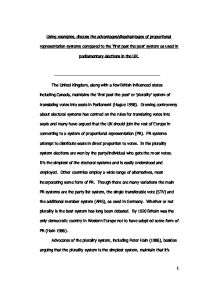 Using examples, discuss the advantages/disadvantages of proportional representation systems compared to the &amp;#145;first past the post&amp;#146; system as used in parliamentary elections in the UK.

Using examples, discuss the advantages/disadvantages of proportional representation systems compared to the 'first past the post' system as used in parliamentary elections in the UK. The United Kingdom, along with a few British influenced states including Canada, maintains the 'first past the post' or 'plurality' system of translating votes into seats in Parliament (Hague 1998). Growing controversy about electoral systems has centred on the rules for translating votes into seats and many have argued that the UK should join the rest of Europe in converting to a system of proportional representation (PR). PR systems attempt to distribute seats in direct proportion to votes. In the plurality system elections are won by the party/individual who gets the most votes. It's the simplest of the electoral systems and is easily understood and employed. Other countries employ a wide range of alternatives, most incorporating some form of PR. Though there are many variations the main PR systems are the party list system, the single transferable vote (STV) and the additional member system (AMS), as used in Germany. Whether or not plurality is the best system has long been debated. ...read more.

Although the Israeli system results in higher ratio of 'effective' votes than even STV and is highly proportional, the country votes as a single constituency and this means an end to local MPs and constituencies (Hain 1986). This reduces the extent to which MPs represent the community and creating a more remote relationship between MPs and the community they represent. The system, although sounding simple, in practise can prove very complicated. In Norway the list system has caused urban voters to be underrepresented due to constituency size and how they are arranged (Hain 1986). It can also lead to lots of small parties in parliament and coalition governments. All PR systems can increase the likelihood of this and it may not necessarily be a bad thing. It means that more people's views can be represented, and "coalition and minority governments have not been noticeably 'weaker' than governments in a two-party situation" (Finer 1975). It is also worth noting that the plurality system has occasionally resulted in coalition governments and "a coalition...can pass its legislation just as easily as a single-party government" (Finer 1975). ...read more.

AV shares the criticism of AMS that two classes of MPs would result, however, all MPs at Westminster should stay equal in status. On reflection, all the electoral systems mentioned have their own problems and advantages it is, perhaps understandable that the government have opted for a referendum on this contentious issue. It seems that the controversy over is ongoing and those advocating change will not succumb to traditionalists' arguments as feelings run high, centring on the pursuit of democratic government. A referendum, promised by the government will be taken before a decision is made and it is unlikely that a new system will be implemented any time soon. It is vital that governments do not rush through a change of system. Once an electoral system is adopted it unlikely to be changed as once a party has been elected through a particular system they do not wish to change it. However, improvement in the fairness of the system must not be forfeited for fear of change. Each excels under different circumstances and what succeeds for one country may not for another. Deciding and agreeing which system is best for the UK is clearly problematic, if indeed any one system is best. ...read more.