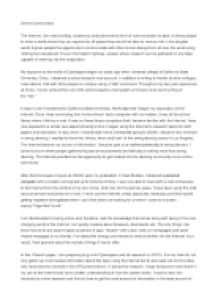 Using the Internet to research UFOs.

﻿Online Communities The Internet...the most exciting, mysterious and phenomenal form of communication to date. It allows people to enter a world where they can explore far off places they would not dare to venture into in the tangible world. It gives people the opportunity to communicate with other human beings from all over the world using nothing but a keyboard. It is an information highway, a place where research can be gathered on any topic capable of entering into the imagination. My exposure to the world of Cyberspace began six years ago when I entered college at California State University, Chico. I obtained a school-based e-mail account. In addition to writing to friends at other colleges, I was able to chat with other people on campus using a "talk" command. Throughout my two-year experience at Chico, I never ventured far out of the school-based e-mail system and never once went surfing on the "net." It wasn?t until I transferred to California State University, Northridge that I began my exploration of the Internet. Since I was commuting from home where I had a computer with no modem, it was at the school library where I did my e-mail. It was on these library computers that I became familiar with the Internet. I was now exposed to a whole new aspect of being online. I began using the Internet to research topics for both papers and recreation. In fact, when I moved back home and started going to CSUN, I became very involved in swing dancing. I wanted to know the "where, when and how" of the swing dancing scene in Los Angeles. ...read more.

The person will then be carried upward in a beam of light and be welcomed by alien beings. It is then that the abductee will be subject to surgical probes and procedures (i.e.: sperm and egg samples). Many abductees have reported coming into contact with hybrids...a cross between human and alien beings. It is believed that this is the reason that reproductive samples are being taken from humans. What is the reason for this hybrid? John Velez, and abductee who was interviewed by NOVA, feels that these alien beings have always been here. Velez believes that these aliens are incapable of reproduction. The hybrids are being created to keep their race from becoming extinct ("NOVA Online/Kidnapped By UFO?s?"). Another occurrence that has been described in abduction stories is the view of the destruction of the planet earth. Abductees have been shown, on television screens, scenes of the earth?s environment being destroyed--showing how pollution has killed the planet. With the creation of hybrids and these scenes of destruction that are shown to the abductees, it is a possibility that aliens are preparing to inhabit the earth after it?s destruction... for the sake of evolution ("NOVA Online/Kidnapped By UFO's?"). So I have been let in one side of the debate. Now it?s time to see what the skeptics say... Thought there are many things that are associated with the alien abduction, skeptics of this phenomenon seem to believe that there is an explanation for every occurrence. The media portrays UFO?s and aliens in such a fashion that it creates specific, familiar images in the minds of "abductees." ...read more.

The second thing I learned in this paper was the basic information I sought regarding alien abduction. As I said earlier in this paper, I wanted to be able to get the most amount of information in the least amount of time. I absolutely accomplished that goal. While investigating the NOVA website, I was able to obtain all of the information I desired about believers and skeptics of the UFO and alien phenomenon. It may have been beneficial to search through various websites trying to get the same kind of information from many different sources. However, having three sources representing each side (believer and skeptic) within one website gave me exactly what I was looking for. The third and final thing I learned while doing this paper was the value of online community. Though I was not able to participate in and benefit from live chats with other people that are part of the community, reading the postings in the discussion group gave me the sense of community I was seeking. True, I have no way of validating what these people were saying. Each and every person could have been making up all of those stories about abduction. But that wasn?t the point. The point was that in this discussion group people answered each other?s questions, responded to ideas, gave encouragement and offered opinions. These are the characteristics of any kind of community. Millions of communities exist all over the world. As human beings we are lucky when we come into contact with one that is different from our own. I feel lucky that I had the opportunity to encounter this unique community and expand my own worldly knowledge. ...read more.