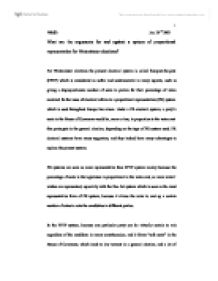 What are the arguments for and against a system of proportional representation for Westminster elections?

Waldo Jan. 26th 2003 What are the arguments for and against a system of proportional representation for Westminster elections? For Westminster elections the present electoral system is called first-past-the-post (FPTP) which is considered as unfair and undemocratic in many aspects, such as giving a disproportionate number of seats to parties for their percentage of votes received. So the issue of electoral reform to a proportional representation (PR) system which is used throughout Europe has arisen. Under a PR electoral system, a party's seats in the House of Commons would be, more or less, in proportion to the votes cast this party gets in the general election, depending on the type of PR system used. PR electoral systems have many supporters, and they indeed have many advantages to replace the present system. PR systems are seen as more representative than FPTP system mainly because the percentage of seats in the legislature is proportional to the votes cast, so more voters' wishes are represented, especially with the free list system which is seen as ...read more.

From the Liberal Democratics' view, this can be seen as a good thing, for it may curb "elective dictatorship" (to use Lord Hailsham's phrase), and because of the competition among parties, MPs may work harder with high attendance in the House of Commons. In October 1997, Lord Jenkins in his report (an Independent Commission on the Voting System) advocated a system of AVPLUS. (Moyra Grant 1999, P.46) Under this system, 80-85 per cent of MPs are elected in single-member constituencies, and a top up of 15-20 per cent members are chosen from parties by a regional list system, to achieve a more proportional outcome. If this system had been used in 1997, Labour would have had fewer seats, but they would still have won the election with a clear majority. Furthermore, opinion polls suggest that about 60 per cent voters would now welcome a PR electoral system. (Moyra Grant 1999, P.39) The main advantage of the FPTP system is its simplicity, one person has only one vote to support one candidate, and the candidate with the most votes wins the constituency, though usually without an absolute majority of votes cast. ...read more.

For instance in Italy, the PR electoral system is regarded as a major cause of weak coalition government. So in a referendum in 1993, a majority of Italians voted to abandon PR and adopt the FPTP system. (Bill Jones, Dennis Kavanagh, Michael Moran, Philip Norton 2001, P.149) Every coin has two sizes, PR electoral systems also have advantages and disadvantages, depending on the view from different angles. Because of the success of PR electoral systems used in other parts of Britain and the Western European countries' elections, the shortcomings of the FPTP system, Lord Jenkins' report, and mainly because the Blair government has considered the possibility of a future referendum on changing the electoral system, the prospects for a PR system have certainly taken a large step forward. (Bill Jones, Dennis Kavanagh, Michael Moran, Philip Norton 2001, P.153) However, each type of PR systems has disadvantage, and mainly because the two dominant parties, Labour and Conservative may not favour PR for they will both lose seats. Thus for Westminster election the prospect of a PR system is still in uncertainty. ...read more.