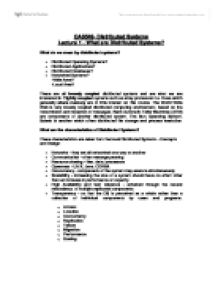 What do we mean by distributed systems?

o Access o Location o Concurrency o Replication o Failure o Migration o Performance o Scaling An Example An Air Ticket Booking System (Hypothetical) The requirements of such a system includes a high level of reliability, security against external interference and privacy of the information that the system holds. The main problems Taken from the same source. * Naming We need some means of referring to objects uniquely, wherever they are in our system. In the worst case the system could be the entire InterNet. * Communication We need a high speed communication infrastructure which supports the high level softwrae structures we use. * Software Structure - for us this will almost always be object based, though we will look at some non object based systems ...read more.

The Course Structure Initially we will be looking at some of the infrastructure needed for distributed systems in particular Remote Procedure Call (RPC) and its object oriented relative Remote Method Invocation (RMI). We will also look briefly at communication between processes mainly using BSD sockets. With this infrastructure we will look at the provision of distributed services e.g. Sun's Network File system (NFS). A major component of the course will be an investigation of Jini as a distributed application infrastructure and the use of this to support a high level framework such as JavaSpaces. These examples will allow us to look at the use of transactions and at design patterns or distributed systems. Other distribution mechanisms (CORBA and DCOM) will be considered in the light of the facilities provided by Jini. Finally we will discuss security issues and the provision of distributed database systems. ...read more.