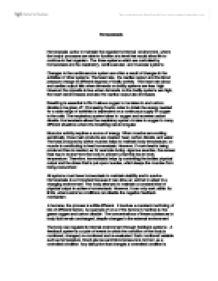 Homeostasis Homeostasis works to maintain the organism's internal environment, where the body's processes are able to function at a level that would allow life to continue in that organism. The three systems which are controlled by homeostasis are the respiratory, cardiovascular, and muscular systems. Changes to the cardiovascular system are often a result of changes in the activities of other systems. The heart rate, the cardiac output and the blood pressure change to different degrees of bodily activity. The heart rate slows and cardiac output falls when demands on bodily systems are less high. However the opposite is true when demands on the bodily systems are high, the heart rate increases and also the cardiac output also increases. Breathing is essential to life: it allows oxygen to be taken in and carbon dioxide to be given off. ...read more.

All systems must have homeostasis to maintain stability and to survive. Homeostasis is so important because it can allow an animal to adapt to a changing environment. The body attempts to maintain a constant level of physical output to achieve homeostasis. However, it can only work within its limits, where extreme conditions can disable the negative feedback mechanism. In humans, the process is a little different. It involves a constant monitoring of lots of different factors. An example of one of the factors it monitors is the gases oxygen and carbon dioxide. The concentrations of these substances in body fluid remain unchanged, despite changes in the external environment. The body can regulate its internal environment through feedback systems. A feedback system is a cycle of events in which the condition of the body is monitored, changed, re-monitored and re-evaluated. ...read more.