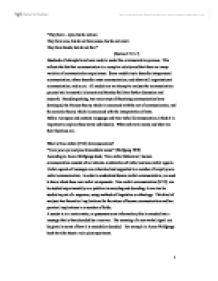 What is Non-verbal (NVC) Communication?

A dialect is a variant of a language. If it is associated with a geographically isolated speech community, it is referred to as a regional dialect. However, if it is spoken by a speech community that is merely socially isolated, it is called a social dialect. An example is the Chinese spoken dialect and written form called nushu. It was apparently known and used only by women in the village of Jiang-yong in Hunan Province of South China, to write memoirs, create songs, and share their thoughts with each other. While women also knew and used the conventional Chinese dialect of their region, they used nushu to maintain female support networks in the face of male domination. In researching for this essay, I found several different communication theories and found out that over the course of time the question of what the essential features of communication are has been discussed from many different angles. It has been recognised that all sorts of aspects of language are purely matters of convention, so that shared conventions are necessary for verbal communication to be possible. In the late 1800s, philosophers like Charles Peirce had developed the idea that communication must be understood, purely in terms of its observable features and effects. Three levels semiotics were then discussed. The first was syntax: the grammatical or other structure of a sequence of verbal or other elements. The second was semantics: the standardised meaning or meanings of the sequence of elements. And the third was pragmatics: the observable effect on those involved in the communication. ...read more.

Some elements of communication behaviour are morphologically similar in much of our species, but the organisation of behaviours in events differs from one tradition to another. Bateson (Wolfgang 1979 p13) uses the term "metacommunication" to describe behaviour about what is happening. We know that people have feelings, beliefs and attitudes about the events they engage in. Many of these are thought about and experienced emotionally while a person participates in an event, some of them are stated, and many are reflected in facial displays and movement qualities. When they are visibly or audibly manifest they are communicative, or metacommunicative by Bateson's definition. There are signals and cues as well as expressions and reactions and they can modify, govern, or even terminate a communicational event. In conclusion language and non-verbal communication are two different forms of communication. However they have a lot of similarities and seem to complement each other in a lot of ways. It is na�ve to be sceptical of non-verbal communication and to think that verbal logic is the proper way to communicate a message. Non-verbal communication plays a huge part in our daily lives and so it would be wise to embrace it properly and use it to enhance verbal communication. "He that has eyes to see and ears to hear may convince himself that no mortal can keep a secret. If his lips are silent, he chatters with his finger tips; betrayal oozes out of him at every pore." Sigmund Freud (1959 cited in Wolfgang 1979 p127) Verbal aspects of messages are elaborated and supported in a number of ways by non-verbal communication. ...read more.