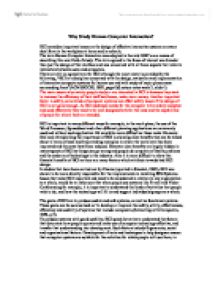 Why Study Human Computer Interaction? HCI considers important issues on the design of effective interactive systems on every day life as in the workplace at home and in schools. The term Human Computer Interaction was adopted in the mid 1980's as a means of describing this new field of study. This term agreed to the focus of interest was broader than just the design of the interface and was concerned with all those aspects that relate to interaction between users and computers. There are still no agreed term for HCI although the most recent is provided by the following, "HCI is a discipline concerned with the design, evaluation and implementation of interactive computer systems for human use and with study of major phenomena surrounding them"(ACM SIGCHI, 1992, page 6)(Lecture notes week 2, slide 4). ...read more.

However clear benefits are largely hidden in many aspects of HCI as things can go wrong and people do complain of health problems and the under se of technology in the industry. Also it is more difficult to show the financial benefits of HCI as there are many factors which attribute towards bad HCI design. In studies that have been carried out by Chanis (reported in Shackel, 1990), HCI was shown to be more directly responsible for the improvements in installing IBM Systems. Issues that make HCI important and need to be considered in relation to any organization as a whole, would be to make sure that when people use systems like E-mail and Video-Conferencing for example, it is important to understand the kinds of activities that people wish to do, and how the technology will fit in and support individuals/groups as a whole. ...read more.

It is important to consider many factors such as; who the user is? Does the system have the correct requirements? And how the user would interact with the system? An example of this is, say the human user of a ticket machine at a station wanted to purchase a ticket a good design and interaction style would be limit the amount of menus as this would shorten the amount of learning the human would have to do. Also the use of touch screen would be easier to use and would limit the actions that are perceived from the system and provide people with a range of usage possibilities. This would link to affordance as it plays a large part in the design of objects but what is the perceived affordance and what the user thinks should be done with object e.g. should a door be pushed or pulled to open. ...read more.