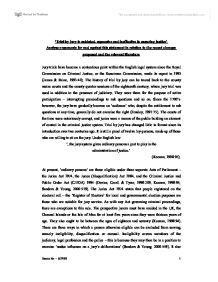 &amp;#145;Trial by jury is outdated, expensive and ineffective in ensuring justice&amp;#146; Analyse arguments for and against this statement in relation to the recent changes proposed and the relevant literature

'Trial by jury is outdated, expensive and ineffective in ensuring justice' Analyse arguments for and against this statement in relation to the recent changes proposed and the relevant literature Jury trials have become a contentious point within the English legal system since the Royal Commission on Criminal Justice, or the Runciman Commission, made its report in 1993 (James & Raine, 1993:40). The history of trial by jury can be traced back to the county assize courts and the county quarter sessions of the eighteenth century, where jury trial was used in addition to the presence of judiciary. They were there for the purpose of active participation - interrupting proceedings to ask questions and so on. Since the 1700's however, the jury have gradually become an 'audience' who, despite the entitlement to ask questions at any time, generally do not exercise the right (Emsley, 1997:75). The courts of the time were notoriously corrupt, and juries were a means of the public holding an element of control in the criminal justice system. Trial by jury has changed little in format since its introduction over two centuries ago. It is still a panel of twelve lay-persons, made up of those who are willing to sit on the jury. Under English law: '..the jury system gives ordinary persons a part to play in the administration of justice.' (Keenan, 1998:95). At present, 'ordinary persons' are those eligible under three separate Acts of Parliament - the Juries Act 1974, the Juries (Disqualification) Act 1984, and the Criminal Justice and Public Order Act (CJPOA) 1994 (Davies, Croall & Tyrer, 1998:209, Keenan, 1998:94, Sanders & Young, 2000:559). ...read more.

The cost for a case to go to the Crown Court in 1999 stood at around �8.600 (Harries, 1999:1 - See Appendix B). With around ninety thousand cases being tried by the Crown Courts annually, that is a substantial cost to the government (Harries, 1999:3). However, less than one percent of all criminal cases ever come before a jury, with ninety-five percent being dealt with by the Magistrates courts (Sanders & Young, 200:552). The Auld Review of the criminal justice system, which reported in September 2001, made recommendations that if implemented, would change the fundamental structure of the courts as we have them at present (Cavadino & Dignan, 2002:89). At present we have a two-tier court system, but under proposals made by Lord Justice Auld, that would be turned into a three-tier system. In his summary of his Review, Auld outlined his recommendations, which made suggestions which covered every aspect of the criminal justice system, excepting arrest and police procedure (Auld, 2001 - See Appendix C). In this review, instigated by the Lord Chancellor's Department, Auld proposed a new structure to the criminal courts, making it into a unified system with three courts in place of the current Magistrates and Crown (Auld, 2001:para4). This would see cases currently defined as TEW either being reduced to summary offences and being tried in the Magistrates Division, or remaining the same and being tried in the new District Division. Under this scheme, the workload and therefore the cost of trial at the Crown Division should be dramatically less than at present, with the judges at the District Division gearing cases with a maximum penalty of up to two years' custody (Auld, 2001:para4). ...read more.

There is another Mode of Trial Bill in consideration in Parliament at present - the previous two in 1999 and 2000 were thrown out by the House of Lords. (Cavadino & Dignan, 2002:116). These are proposing the changes to the criminal justice system as recommended by Auld, but it remains to be seen how well it will be received in the House of Lords this time. So, is trial by jury 'outdated, expensive and ineffective at ensuring justice'? Expensive it certainly is, as has already been made clear, but whether it is outdated is difficult to answer. The system has not been dramatically changed for a long time, but since the Auld Report was released, there have been many new recommendations made for modification to the present system. As with any system of justice, there is a need to maintain the confidence of the public in order for there to be a legitimacy of the system. Trial by jury cannot be said to be ineffective if it maintains that confidence, even if that is not the intended primary function. So, whilst it is probably a little outdated, it is in the process of an overhaul which will rectify the problem. Our criminal justice system has always been respected world-wide, and the incorporation of the European Convention on Human Rights (ECHR) into British law by the implementation of the 1998 Human Rights Act (HRA) indicates there are no grave problems with our jury system. This is because we are not required by the HRA to amend our criminal justice system in any way, because we are adhering to Article Eight of the ECHR - a fair trial by an independent and impartial tribunal (Sanders & Young, 2000:566). ...read more.

A good essay that considers the main issues well.

To bring this up to date, the student could make reference to the Coalition's