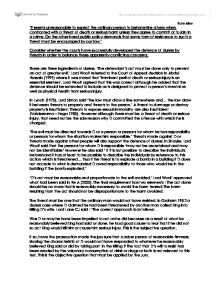 It seems unreasonable to expect the ordinary person to behave like a hero when confronted with a threat of death or serious harm unless they agree to commit or to join in a crime. On the other hand public policy demands that some form of resi

'It seems unreasonable to expect the ordinary person to behave like a hero when confronted with a threat of death or serious harm unless they agree to commit or to join in a crime. On the other hand public policy demands that some form of resistance to such a threat must be encouraged by our law.' Consider whether the courts have successfully developed the defence of duress by threats in order to balance these apparently conflicting concerns. There are three ingredients of duress, 'The defendant's act must be done only to prevent an act of greater evil.' Lord Woolf referred to the Court of Appeal decision in Abdul Hussain (1999) where it was stated that 'imminent peril of death or serious injury is an essential element. Lord Woolf agreed that this was correct although he added that the defence should be extended to include acts designed to protect a person's mental as well as physical health from serious injury. In Lynch (1975), Lord Simon said 'the law must draw a line somewhere and... the law draw it between threats to property and threats to the person.' A threat to damage or destroy property is insufficient. ...read more.

as a result of what he reasonably believed King had said or done, he had good cause to fear that if he did not so act King would kill him or cause him serious injury. This is the subjective question. If so, have the prosecution made the jury sure that a sober person of reasonable firmness, sharing the characteristic of D would not have responded to whatever he reasonably believed King said or did by taking part in the killing ? The fact that D's will to resist has been eroded by the voluntary consumption of drink or drugs or both is not relevant to this test. This is the objective question that must be applied by the Jury. The first question is whether D was or might have been impelled to act as he did because as a result of his reasonable belief he had good cause to fear that if he did not act, he (or some other person for whom he was responsible) would die or suffer serious physical or mental injury. This test concentrates on D's belief. ...read more.

Is it realistic to expect an accused to have the courage to sacrifice their own life or that of a loved one rather than participate in a murder simply by driving a murderer to the scene of an intended killing ? Can you justify this limitation on the basis of 'the lesser of two evils' or are there wider public policy considerations which require the defence to be unavailable ? Is it fair to convict anybody for failing to demonstrate heroic qualities in such a situation ? If not, how else might human frailty be considered ? Can you think of a 'fair and certain basis on which to differentiate between participants in a murder', who were threatened with their children's deaths unless they gave some purely mechanical assistance such as providing the victim's address and the person who actually carried out the killing ? There are strong moral argument for excusing a person who has acted in a criminal manner in order to avoid a greater evil from occurring and it would seem to be a harsh system of criminal justice that would deny such a person a defence in such circumstances. ?? ?? ?? ?? Kate Allen ...read more.