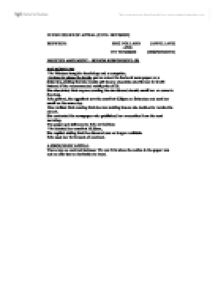 IN THE COURT OF APPEAL (CIVIL DEVISION) BETWEEN: ERIC POLLARD (APPELLANT) -AND- VIV WINDSOR (RESPONDENT) WRITTEN ARGUMENT - SENIOR RESPONDENT; ISI BACKGROUND Viv Windsor bought a local shop and a computer, Anxious to please the locals, put an advert in the local news paper on a Saturday, stating that she would sell luxury chocolate shortbread for �2.50 instead of the recommended retail price of �5. She also stated that anyone wanting the shortbread should email her or come to the shop. Eric pollard, the appellant saw the email at 4.30pm on Saturday and sent her email on the same day. She realised that evening that she was making lose so she decided to revoke the advert. She contacted the newspaper who published her revocation 9.am the next morning. The paper got delivered to Eric at 10.30am Viv checked her email at 10.35am, She replied stating that the discount was no longer available. Eric sued her for breach of contract. A GROUND OF APPEAL There was no contract between Viv and Eric since the notice in the paper was not an offer but an invitation to treat. ARGUEMENT A contract by definition is an agreement between two parties by which both parties are bound by the law and which can therefore be enforced in a court or other equivalent forum. The law of contract has been known to bring equality and fairness especially to consumers whom are said to be more disadvantaged than suppliers/ sellers. ...read more.

smoke ball 1893 which the judge ruled that there had been a breach of contract because the sellers of the smoke ball deposited a certain amount in the bank therefore having intentions to be legally bound. It is essential to note the differences between these two cases. Carlill V carbolic smoke ball was a unilateral offer being that there was consideration between the owners of the carbolic smoke ball company and whoever chooses to use the smoke ball in a certain way unlike the present case at hand where there was no consideration of any sort. Although Viv did put a statement of price on the shortbread it is important to establish the fact that a statement of price does not amount to an offer. The case of Gibson V Manchester City Council 1979 has set precedent in the sense that the council presented a statement of price to Gibson and asked him to complete a certain form which should be submitted. The court still ruled that this was not an offer but an invitation to treat even though there had been some sort of negotiation between the parties. The issue of differentiating an offer from an invitation to treat exists in case law and was established in the case of timothy V Simpson in order to create equity and following the idea that there is freedom to contract. ...read more.

First of all, in good faith she wanted to sell an item for a discount price hoping that this would be an invitation to consumers to come purchase the other items in her shop, but when she noticed that people were not interested in other items in the shop but the shortbread and she was thereby making a loss, she quickly revoked the advert. Furthermore, in Shuey V US..., (1875) a case which concerned the apprehension of a criminal but was latter revoked without the plaintiff's awareness. An authority was set for the fact that it is sufficient if the revocation is communicated using the same channel used to communicate the original offer and if this is done it is irrelevant if particular offerees did not see or know about the revocation although this is not an English case, the English case of Routledge V Grant (1828) which set an authority that an offer can be revoked provided it is communicated to the offeree. This would be applied if Eric had really believed that there was a contract in the first place. Since there was no consensus ad idem, the advert made by Viv falls under the shopping rules which states that an advertisement on a newspaper is not an offer but an invitation to treat, there was no offer nor acceptance of any sort, it would be simply fraudulent for Eric to try and Force Viv into an un- existing contract and try to make her liable to prosecution. ...read more.

A good essay in parts. But the fact that the student fails to address acceptance - central to understanding this problem question - means marks have been lost.