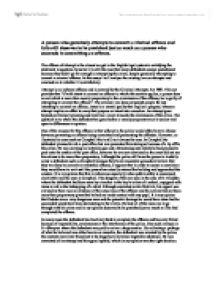 A person who genuinely attempts to commit a criminal offence and fails still deserves to be punished just as much as a person who succeeds in committing an offence. The offence of attempt is the closest we get in the English legal system to satisfying the statement in question; however it is still the case that many defendants escape punishment because they didn't go far enough in attempting the crime, despite genuinely attempting to commit a criminal offence. In this essay I will analyse the existing law on attempts and conclude as to whether it is satisfactory. Attempt is an inchoate offence and is covered by the Criminal Attempts Act 1981. This act provides that "if with intent to commit an offence to which this section applies, a person does an act which is more than merely preparatory to the commission of the offence; he is guilty of attempting to commit the offence". The criminal law does not punish people for just intending to commit an offence; intent is a mental quality that implies a purpose, whereas attempt implies an effort to carry that purpose or intent into execution. An attempt goes beyond preliminary planning and involves a move towards the commission of the crime. The question as to where the defendant has gone before a merely preparatory act is unclear and open to differences in opinion. ...read more.

This role of sentencing will both benefit people who have committed an attempt or those with only the mens rea of the offence and have not gone far enough for the actions to be seen as more than preparatory. The question of whether an act is "more than merely preparatory" is a matter of fact and, in a trial on indictment, will be for the jury to decide. It seems that for some crimes, the defendant must go much further to completion of the act than for others and I believe that this needs clarifying in order to make the law fairer. For example Geddes, a man who was found in the boys' toilets equipped with a knife, tape and rope was found to have not committed attempted false imprisonment yet, R v Tosti and White who like Geddes were only found with the equipment needed to commit their crime of Burglary were found guilty. In committing an attempt the defendant has the mens rea for the complete offence and may be equally as dangerous. The academic Becker (1974) argues that whether an offence is actually committed or merely attempted, the same type of harm can be caused: disruption and social stability. One such example is in R v Gullefer where the defendant seeing that the dog that he had backed at the greyhound race was losing, jumped onto ...read more.

However, the House of Lords have since overruled their own decision in Shivpori where the defendant was arrested by customs officers and confessed that there was heroin in his luggage, however it was found that the substance was only vegetable leaves yet he was still convicted of an attempt. Now the only case in which impossibility can be a defence is if ther accused attempts to commit what they think is an offence, but which is actually not against the law such as in Taaffe. In conclusion I agree with the view in the question to a large extent. A person who genuinely attempts to commit a criminal offence and fails still deserves to be punished just as much as a person who succeeds in committing an offence. A defendant who has committed an attempt is still morally wrong and possibly just as dangerous as if they had managed to complete the offence. I believe that the current position of the law in England on the sentencing of attempts for most cases sufficient however there should be a clearer line drawn between what is preparatory and what the part of the crime. The offender should face the maximum sentence for the completed offence and a judge should decide based on the merits of the case, the sentence appropriate for that defendant. ...read more.