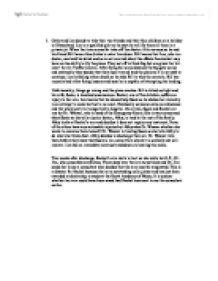 1. Cathy and Len decide to take their two friends and their four children on a holiday to Disneyland. Len is a qualified pilot so he says he will fly them all there in a private jet. When the time comes for take-off Len feels a little nervous so he and his friend Bill have a few drinks to calm Len down. Bill knows that Len, who is a doctor, can hold his drink and so is not worried about the effects the alcohol may have on his ability to fly the plane. They set off in thick fog but are given the 'all-clear' by Air Traffic Control. After flying for some distance the fog gets worse and eventually they decide that they must try and land the plane as it is not safe to continue. Len is feeling rather drunk so he asks Bill to take the controls. Bill has recently had a few flying lessons and says he is capable of attempting the landing. Unfortunately, things go wrong and the plane crashes. Bill is killed outright and his wife, Susie, is knocked unconscious. Rachel, one of the children, suffers an injury to her arm. Len knows that he should help Susie so he shakes her violently in an attempt to wake her but to no avail. Eventually someone calls an ambulance and the whole party is transported to hospital. On arrival, Susie and Rachel are met by Dr. ...read more.

Further information may need to be acquired such as the duration of the option. It could be that it expires before he purchases the house, which will mean he will not be bound by it. If the option has not been registered estate contracts are void against a purchaser for money or money's worth of a legal estate in the land5. This is illustrated in Midland Bank Trust Co Ltd v Green [1981]6 where it was considered that the purchaser can take free of the option regardless of the amount of money. The facts of the case were that Green gave his son Geoffrey an option to purchase farmland he owned for 21000 over the next 10 years. However, before that time expired he sold it to his wife for �500. By this time he had not registered the charge. Geoffrey sought to enforce his option against his mother. However, Lord Wilberforce said that �500 is money and it does not matter if it was an undervalue. Using this authority it is possible for Alf to take free of the estate contract. Restrictive covenants should be registered as a class D (ii) land Charge if it entered into after 1925. However, it was entered into 1894 making it an equitable easement, which if he is to take free of, needs to comply with the doctrine of notice. He has actual notice of this restrictive covenant so he will therefore be bound by it. ...read more.