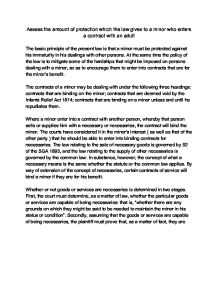 Assess the amount of protection which the law gives to a minor who enters a contract with an adult The basic principle of the present law is that a minor must be protected against his immaturity in his dealings with other persons. At the same time the policy of the law is to mitigate some of the hardships that might be imposed on persons dealing with a minor, so as to encourage them to enter into contracts that are for the minor's benefit. The contracts of a minor may be dealing with under the following three headings: contracts that are binding on the minor; contracts that are deemed void by the Infants Relief Act 1874; contracts that are binding on a minor unless and until he repudiates them. Where a minor enter into a contract with another person, whereby that person sells or supplies him with a necessary or necessaries, the contract will bind the minor. The courts have considered it in the minor's interest ( as well as that of the other party ) ...read more.

One exception to the rule is if the subject matter of the contract, with the minor, is considered necessaries. The Sale of Goods Act 1979 S.3 defines necessaries as goods that are suitable to the condition in life of the minor and to his actual requirement at the time of sale and delivery. Also, that the minor need only pay a reasonable price for the necessaries; which may not be the same as the contract price. Necessaries can include services such as education. In the English case of Nash v Inman the defendant, a tailor, supplied eleven fancy waistcoats and other items of clothing to a Cambridge undergraduate at a cost of �123. It was held that the tailor could not recover the money as the clothes were not "necessaries", the minor had a sufficient amount of his own clothes. Another exception to the rule is where a minor is bound by a service contract which is for their benefit. This does not mean that a minor is bound by any contract which is beneficial but only those which relate to an employment or similar contract. ...read more.

These have received special treatment, although (as Treitel points out) there is no logical reason why this should be so. However, the case law establishes that contracts concerning land, company shares, partnerships, family settlements and insurance are all voidable by the minor only if he denies the contract. Where a minor agrees to buy shares in a company then the contract is voidable at the minor's option. In Steinberg v Scala (Leeds) Ltd. a minor applied and partly paid for shares in the defendant company. However 18 months after the defendant company had allotted the minor the shares she decided to rescind the contract and also sued to recover the money she had initially paid to the defendant company. The court held that the plaintiff was entitled to rescind the contract and would not be liable to make any further payments. However she was not entitled to recover the money she had initially paid the defendant company because there was a sufficient amount of consideration as she had been allotted the shares. This area of contract law may need to be rethought and areas within it cleared up as there is no need for a lot of the confusion that it can lead to. ...read more.