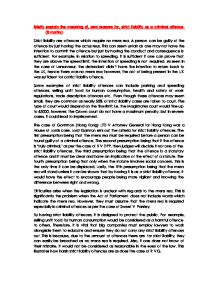 Briefly explain the meaning of, and reasons for, strict liability as a criminal offence

Briefly explain the meaning of, and reasons for, strict liability as a criminal offence (8 marks) Strict liability are offences which require no mens rea. A person can be guilty of the offence by just having the actus reus. This can seem unfair as one may not have the intention to commit the offence but just by having the conduct and consequence is sufficient. For example, in relation to speeding, it is sufficient if one can prove that they are above the speed limit, the intention of speeding is not required. As seen in the case of Larsonneur, the defendant didn't have the intention to return back to the UK, hence there was no mens rea; however, the act of being present in the UK was sufficient for a strict liability offence. Some examples of strict liability offences can include parking and speeding offences, selling unfit food for human consumption, health and safety at work regulations, trade description offences etc. Even though these offences may seem small, they are common as nearly 50% of strict liability cases are taken to court. ...read more.

is as a strict liability offence, it would have the effect to encourage people being more vigilant and knowing the difference between right and wrong. Difficulties arise when the legislation is unclear with regards to the mens rea. This is significantly the problem when the Act of Parliament does not include words which indicate the mens rea. However, they must assume that the mens rea is required especially in criminal offences as per the case of Sweet V Parsley. By having strict liability offences, it is designed to protect the public. For example, selling unfit food for human consumption would be considered as a harmful offence to others. Therefore, it is vital that big companies must employ lawyers to work alongside them to educate and ensure they do not carry any strict liability offences out. This is because, due to the amount of offences there are for strict liability, they can easily be breached as no mens rea is required. Also, if one does not know of their mistake, it would not be considered as reasonable in the eyes of the law. ...read more.

However, strict liability offences illustrate injustice. This is because it goes against the principle that criminal law punishes fault. By having the mens rea difficult to prove, this can be seen as morally doubtful. Even though liability is strict; it is not absolute as a defence maybe available. Defences such as duress; where one is being forced to commit an act, or automatism which is an act done by a person who is not conscious of what he is doing. The case of R V Kumar, illustrates that even though the offence was one of strict liability a defence was available. To conclude with, strict liability requires no mens rea, therefore they provide injustice. This has been seen in the case of Larsonneur and Winzar V Chief Constable of Kent. Also, because these are small offences, some may feel that they should plead guilty even though they are not blameworthy. This can also be seen as injustice as one didn't have the intention to commit it. This was illustrated in the case of Harrow London Borough Council V Shah. However, by having these sorts of offences, it saves court time as well as money. ...read more.

The conclusion could have been neater, however.