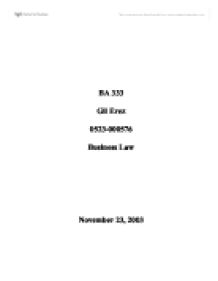 BA 333 Gil Erez 0523-000576 Business Law November 23, 2003 Table of Contents: 1) Essentials of a contract ....... Page 2 2) Case ............................ Page 5 1) What are the essentials of a valid contract A contract, by definition, is an agreement by two or more parties, which is intended to be legally binding and supported by consideration. All contracts must have these three elements present for it to qualify as a proper contract in the eyes of the law: offer and acceptance, consideration, and intent to create legal relations. First, we will examine the first part of what constitutes a contract, the offer and acceptance. An offer is a statement said from the offeror to the offeree stating that he would like to formulate a contract between the two parties. The offer must include something specific, and which has value, either monetary or otherwise between the parties. An offer must also state the time period for its validity. If one were not stated, it would be up to the courts to decide what would be the proper length of validity of the offer. Once the validity period of the offer has lapsed, an acceptance of the offer cannot be made, unless the offeror agrees to repeat the offer. ...read more.

The company then deposited 1,000 � in a bank to show their seriousness. Carlill used the product and was not cured, then sued the company. The company's argument was that the advertisement was just for promotions, and they did not intend to create legal relations. The courts upheld that because of the deposit in the bank, the company showed sufficient intent to create legal relations. Only a fool would argue that when he goes into a shop to buy an item, he didn't really mean to. With these two brought to light, we can clearly see what constitutes intent within a contract. It is one of the vital elements of a contract, and without it a contract cannot exist. "The cause which moves a contracting party to enter into an agreement; the material cause of a contract; the price of a stipulation; compensation; equivalent" --Bouvier. Finally, we will discuss the last essential of a valid contract, consideration. Consideration is defined as something promised, given, or done that has the effect of making the agreement a legally enforceable contract. For consideration to be valid, it must have four elements present. First, consideration should not be past. One cannot give consideration for an act that has already been done, or a deal that has already been transacted. ...read more.

In the practice of law one can never argue facts on the assumption that they happened. The fisherman, for some strange reason, might have declined the 1,000$. The presence of acceptance is not clear; this would have to be subject to further investigation. The presence of intent to create legal relations is clearly visible, with the offer of 1,000$ stated. This is one element of the contract that is not shrouded in mystery, so therefore we may now continue onto the last element of a contract. Consideration must not be past, must be sufficient, must move from the promisee and must not be illegal. The evidence here is clear, the consideration was past and therefore not valid. Having saved his life earlier without George making an express agreement to pay him 1,000$, the fisherman is legally entitled to nothing from George. It is out of the kindness of George's heart, and maybe gratification, that he is paying the fisherman 1,000$. Therefore we can properly advice the fisherman not to pursue legal action if George refuses to pay. By helping George in his time of need, the fisherman would have been protected from any liability of death due to the Good Samaritan Act (Chapter 32-03.1). The fisherman therefore is in a good situation as it is. If George doesn't want to pay the 1,000$ which he promised that would be on his conscience not the fisherman's. ...read more.