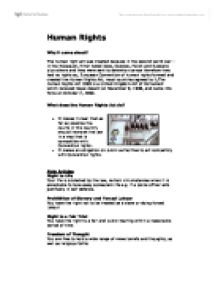 Why it came about?

The human right act was created because in the second world war – in the Holocaust, Hitler hated Jews, Gypsies, Polish and Russians plus others and they were sent to detention camps therefore they had no rights so, European Convention of human rights formed and created the Human Rights Act, most countries agreed to it,The Human Rights Act 1998 is a United KingdomAct of Parliament which received Royal Assent on November 9, 1998, and came into force on October 2, 2000.

What does the Human Rights Act do? 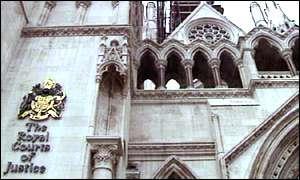 Main Articles
Right to Life
Your life is protected by the law, certain circumstances when it is acceptable to take away someone’s life e.g. if a police officer acts justifiably in self defence.

Freedom of Thought
You are free to hold a wide range of views beliefs and thoughts, as well as religious faiths

Freedom of Expression
You have the right to hold opinions and express your views either individually or as a group. Even if disturbing.

Right to Marry
Men and Women have the right to start a family, the nationals law will still determine what age this can take place.

This act was created by the Disability Rights Commission.

Sex Discrimination Act 1975
It is unlawful to discriminate against sex and within the act there are 3 types of discrimination, direct, indirect and victimization.

Equal Pay Act 1975
It is unlawful to discriminate between man and women in terms of pay and conditions in the workplace.

These act’s was created by the Equal Opportunities Commission.

Race Relations 1975
It is unlawful to discriminate against:
Race
Colour
Nationality
Ethnic/National Origins

This applies when in employment, training, housing, education, services.

This act was created by the Commission for Racial Equality.

How the Public Services Implement the Human Rights Act.

The Police ensure that the Human Rights Act (HRA) is implemented by the public through enforcing the act and any associate criminal offences that may result from breaches the human rights act.

The Police also make sure that the service itself implements the act by ensuring strict knowledge and following of Police and Criminal Evidence Act (PACE) and any other related documents e.g. policy’s or procedures.

The Army must also make sure that all soldiers abide by the regulations set out in the Geneva Convention.

In the Geneva Convention there are 4 conventions which cover a variety of issue’s such as armed forces on land and sea, treatment of prisoners of war and the treatment of civilians in the time of war.

The 1st an 2nd Geneva conventions are very similar

· The sick, wounded and shipwrecked must be cared for adequately

· The dead should be collected quickly

· The dead should be identified quickly and protected from robbery

· Medical personnel and establishments should not be attacked

The 3rd Geneva convention outlines what should happen if a member from the armed forces falls into enemy hands and becomes a prisoner of war (POW).

· POWs do not have provided any information other than their name, rank and service number.

· POWs must be treated humanely

· POWs must be allowed are correspond with their family

· POWs must be supplied with adequate food and clothing

· POWs must be provided with medical care.


The 4th Geneva Convention deals with protection of civilian personnel in war time.

Protected civilians must be:
Treated humanely
Entitled to respect for honour, family and religious practices·
Allowed to practice their religion
Specially protected in safety zones

Protected civilians must not be:
Discriminated against because or race, religion or political opinion
Forced to give information
Used to shield military operation
Raped, assaulted or forced into prostitution
Punished for offences they have not committed

Gender
Sex descrimination act 1975. prior to the act women had a limited police role.Since the Equal Opourinites Legislation became enforced all specialisations are open to women. Homosexual and lesbian officers were alowwed to join the police since the legislation of homosexuality in 1967.

Race and Religion
Police open to all race, religion, creed, colour or belief. Removal of height restricitond, however  police have posotive policies to recruit and retain from minority groups (targets are even set) They have implemented race relations awarness into initial training.

Disability
Disability Discrimination act 1995, The removal of medical questionairre prior to the selection process. They have removed specific conditions barring entry. All applicants judged primarily on the ability to undertake the role of a police officer and are not judged on anything else.

Age
Most Officers must retire at 55. no upper age limit for joining the police although the candidate must be able to complete probationary period of 2 years.

Gender
The army are exempt from the sex discriminations act, Upto 1992 many job options were closed to females. In 1992 The Womans Royal Army Corps disbanded. Most oppourtunitys have become open to women with some exceptions (eg parachute regiment)

Sexuality
In 1994 Homosexual Decriminalised but still let to dismissal. In 1999 homosexuals were aloud to serve in the army, in 2005 gender realingment personell are alowed to serve subject to service restrcitions on combat arms.

Race and religion
No restrictions on race or religion, subject to citizenship and residence requirements. Posotive Policies in place to recryuit and retain ethnic minorities.

Disability
The Army are exempt from Disability Discriminatino Act,because of the tasks that are included in the job role. A list of conditions that disqualify an individual from applying service

Age
The maximum age to join is 30 years and soliders can complete 22 years service. Officers can continue and do 35 years of service o the maximum age of 60 then they must retire.