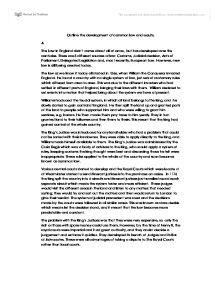 Outline the development of common law and equity. A The Law in England didn't come about all at once, but has developed over the centuries. There are 5 different sources of law: Customs, Judicial decision, Acts of Parliament, Delegated Legislation and, most recently, European Law. However, new law is still being created today. The law as we know it today all started in 1066, when William the Conqueror invaded England. He found a country with no single system of law, just sets of customary rules which differed from area to area. This was due to the different invaders who had settled in different parts of England, bringing their laws with them. William decided to set events into motion that helped bring about the system we have at present. William introduced the feudal system, in which all land belongs to the king, and he slowly started to gain control of England. He then split the land up and granted parts of the land to people who supported him and who were willing to grant him services, e.g. barons. He then made them pay taxes to him yearly. They in turn granted land to their followers and then them to theirs. This meant that the king had gained control of the whole country. The King's Justice was introduced for any landholder who had a problem that could not be sorted with their landowner. ...read more.

They still continued to be two distinct systems, each with its own principles. It was said that "the two streams have met and now run in the same channel but their waters do not mix". B As a result of the Judicature Acts 1873-1875, the common law court system and the court of chancery were combined. So now, all civil courts administer both systems concurrently and can apply both equitable and common law principles to the cases that come before them and award either common law or equitable remedies. However, if a conflict between the two systems arises, equity will prevail. By the middle of the 17th century the judges began more and more to follow the decisions of their predecessors and by the end of the century there was a marked attempt to reduce equity to a more fixed system. The principles of equity continued and by 1948 the Court of Appeal was saying in the case of Re Diplock that any claim in equity "must be shown to have an ancestry founded history and in practice and precedents of the courts administering equity jurisdiction. It is not sufficient that, because we may think that the justice of the present case requires it, we should invent such a Jurisdiction for the first time." Equity created legal maxims, which had to be satisfied before equitable rules could be applied. Maxims are principles applied by courts of equity in deciding cases before then and were designed to make sure that decisions made by the courts were morally fair. ...read more.

The second is known as a Freezing order, and this is obtained again usually following an ex parte application, to prevent the defendant from removing assets outside the jurisdiction making then unavailable if damages were ordered. This type of injunction will also be granted if there is a real danger that the assets will be dissipated within the jurisdiction In the Hamiltons Case the court granted a freezing order on Ms Milroy-Sloan's assets. Ms Milroy-Sloan accused Neil and Christine Hamilton of sexual assault and received �400,000 from the News of the World by giving them an interview. The Hamiltons were demanding "appropriate" damages and had obtained a High Court injunction freezing her assets up to �400,000, pending the outcome of legal proceedings. Another freezing order was granted to the Assets Recovery Agency on 4th July 2005 in respect of a limited edition Volkswagen Golf R32 which was purchased with �24,000 in cash. Mr McGovern acquired the assets from the proceeds of unlawful activity and now has 14 days to make his initial response to the Agency's case. Whilst the Freezing Order is in force he cannot dispose of the car. More recent attempts to extend equitable jurisdiction, notable in Scandinavia Trading Tanker Co AB v Floata Petrolera Ecuatoriana (1983) have been firmly resisted by the House of Lords The availability of discretionary remedies means it still fulfil the traditional function of supplementing the common law, providing just and practical remedies where the common law alone is not enough, but restricting itself to cases where those remedies are felt to be genuinely and justly deserved. ...read more.

Summary: An excellent historical outline of the development of common law and equity, showing how equity is still relevant today.
Rating: *****