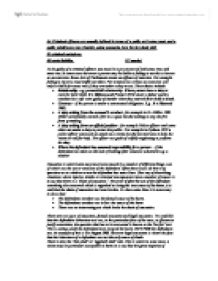 Criminal offences are usually defined in terms of a guilty act (actus reus) and a guilty mind(mens rea). Explain, using examples, how the law deals with (i) criminal omissions; (ii) strict liability.

(a) Criminal offences are usually defined in terms of a guilty act (actus reus) and a guilty mind(mens rea). Explain, using examples, how the law deals with (i) criminal omissions; (ii) strict liability. (15 marks) To be guilty of a criminal offence you must be is possession of both actus reus and mens rea. In some cases however a person may be liable to failing to act this is known as an omission. Some Acts of Parliament create an offence of omission. For example failing to report a road traffic accident. For common law crimes an omission will only be liable for actus reus if they are under a duty to act. These duties include: * Relationship- e.g. parent/child relationship. Where parents have a duty to care for their child. R v Gibbons and Proctor 1918 where a father and his common law wife were guilty of murder when they starved their child to death. * Contract - if the person is under a contractual obligation. E.g. R v Pittwood 1902. * A duty arising from the accused's conduct- for example in R v Miller 1983 Miller accidentally started a fire in a squat but did nothing to stop the fire from spreading. * A duty arising form an official position- for example Police officers and some other are under a duty to protect the public. ...read more.

ii.)To be guilty of criminal offence this requires both of actus Reus and mens rea. However in some offences only actus Reus is required, these are known as strict liability offences. Illegal parking is an example of a strict liability offence. It can be that a person who parks on double yellow lines did not realise they have done so and so did not possess the mens rea. Recklessness does not need to be shown to convict someone of a strict liability offence. Other examples include trading standards, food safety and the sale of tobacco or lottery tickets to under age children. Statues do not always specify whether or not mens rea is required for a particular offence. However there are two general questions 'do the words used in the Act imply strict liability?' and 'is the offence really criminal or merely regulatory?' Do the words used in the Act imply strict liability? In the case of Gammon ltd v Attorney general of Hong Kong 1985 it was stated that even if an offence did not specify strict liability the words used might nether less indicate this. Criminal or regulatory it is well established that the courts should start from the presumption that all criminal offences require mens rea. However Lord Scarman stated that a distinction should be made between offences that are 'truly criminal;' and those that are concerned with an issue of 'social concern.' ...read more.

In some cases however it can be difficult to accept that the defendants' mens rea was anything other than intention. An example is Moloney 1985. A solider was having a competition with his father to load a shot gun. Moloney won and his father said go on then shoot it and he shot it at him, instantly killing him. Moloney then said. 'I never conceived that what I was doing might cause injury to anybody. It was just a lark.' However some may say that instinctively he must have known that that would happen to his father.' Willow Mentos AS Law Andrew Proctor Word Count: 1, 436 Reg believed that Jack had given a statement about him to the police. He was furious about this and went to Jack's house. Jack was asleep in a chair in the garden. Reg went up to Jack, knocked him unconscious with a cosh and then cut out his tongue. (a) Criminal offences are usually defined in terms of a guilty act (actus reus) and a guilty mind(mens rea). Explain, using examples, how the law deals with (i) criminal omissions; (ii) strict liability. (15 marks) (b) Taking into account both actus reus and mens rea, discuss Reg's criminal liability for the attack on Jack. (10 marks) Please include an essay plan at the start of your answer, as these can be used to give you marks in an exam if you don't manage to finish your answer. It's just good practice, people! ...read more.