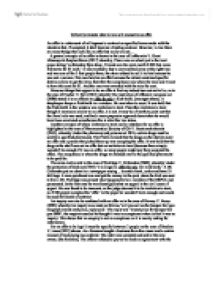 Critically evaluate what in law will amount to an offer

Critically evaluate what in law will amount to an offer An offer is a statement of willingness to contract on specified terms made with the intention that, if accepted, it shall become a binding contract. However, in law there are many things that look like an offer but really are not... A general example of an offer is shown in the case of Leftkowitz V. Great Minneapolis Surplus Stores (1957) whereby, There was an advert put in the local paper stating 'on Saturday 9pm sharp, 3 brand new fur coats worth $100 first come first serve for $1 each.' A man wanted to buy a coat and had come at the right time and was one of the 3 first people there, the store refused to sell it to him because he was not a woman. This was held as an offer because the advert contained specific details on how to get the item; therefore the acceptance was when the man said I want to have this coat for $1. ...read more.

The P.S.G claimed that the drugs on the shelves were an offer and a person that picked them up was accepting the offer. It was held that the drug on the shelf was not an offer but an invitation to treat (because there simply wouldn't be enough if it was an offer, as many people might say they accepted the offer). The acceptance is when the drugs are handed over to the qualified pharmacist to be paid for. The same can be said in the case of Partridge V. Crittenden (1968), whereby Under the protection of birds act (1953) 'it is illegal to offer for sale live wild birds.' A Mr. Crittenden put an advert in a newspaper saying... bramble finch, cocks and hens 25 shillings. A man purchased one and put the money in the post, when the bird was sent to him a Mr. Partridge was present who happened to be a member of the RSPCA and prosecuted. In the first case he was found guilty but on appeal in the civil court of appeal. ...read more.

Court held that because the offer was specific between the 2 parties any previous agreement was irrelevant. An offer can also be implied as in the case of Thornton v Shoe Lane Parking (1971) whereby Mr Thornton parked his car in a commercial car park. The car park did display a sign to the effect that cars were parked at the owner's risk. As it happens it was Mr Thornton that was injured, not the car. The car park's terms of business were printed on the back of the ticket issued from the ticket dispenser but, it was ruled, this did not form part of the contract as the contract was concluded before the ticket was issued. The notice on the building was deemed insufficiently precise to allow a disclaimer of liability for injury. In conclusion invitations to treat and inquiries are not offers, therefore this in law will not amount to an offer, however if there is an offer and it is specific between 2 people, then this will be deemed as a legitimate offer. Similarly if the offer is implied it can still be deemed to be an offer. By Ford-Western 13L ...read more.