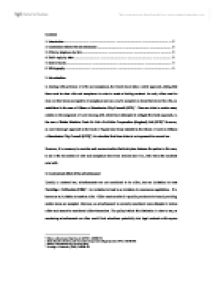 Dealing with problems of offer and acceptance.

Contents 1. Introduction 2 2. Contractual effect of the advertisement 2 3. Offer by telephone by Rob 3 4. Rob's reply by letter 3 5. Sale to Sunita 4 6. Bibliography 5 1. Introduction In dealing with problems of offer and acceptance, the Courts have taken a strict approach, stating that there must be clear offer and acceptance in order to create a binding contract. As such, offers must be clear on their terms and capable of acceptance and can only be accepted on terms that mirror the offer, as established in the case of Gibson v Manchester City Council (1979) 1. There are dicta in certain cases, notably in the judgments of Lord Denning MR, which have attempted to mitigate this harsh approach, in the case of Butler Machine Tools Co Ltd v Ex-Cell-o Corporation (England) Ltd (1979)2. However, as Lord Denning's approach in the Court of Appeal was firmly rejected by the House of Lords in Gibson v Manchester City Council (1979)3, it is submitted that these dicta do not represent the current law. However, it is necessary to consider each communication that took place between the parties in this case, to see if the formalities of offer and acceptance have been fulfilled and if so, with whom the contracts exist with. ...read more.

The postal rule is reflected in the case of Adams v Lindsell7, where acceptance is deemed to have been effective at the instant, when Tom dropped the acceptance letter into the post box, provided it is properly addressed and adequately stamped. If the offeror takes the contractual risk of the letter being lost in the post, as stated in the case of Household Fire Insurance Co v Grant (1879)8. However, this depends upon the use of the postal service being reasonable, which was established by the case of Holwell Securities Ltd v Hughes (1974) 9. It is submitted that in this case, the use of the post is not reasonable, as Rob has always previously dealt with Tom by telephone. The contractual risk of the letter not arriving must therefore be deemed to fall on Tom, who therefore cannot rely upon the postal rule to create a binding contract. Additionally, even if the letter had arrived, there is also some doubt whether the terms of the letter can constitute an acceptance as the acceptance must mirror the offer as was stressed by the House of Lords in Gibson v Manchester City Council (1979)10. However, Tom was asking for payment by instalments. As such, this letter is potentially a counter-offer, capable of acceptance but not sufficient to create a binding contract. ...read more.

There is nothing specific by way of offer or rejection but a mere enquiry, which should have been answered.12 It is establishes that an enquiry over the terms of payment can equally be construed as an enquiry that should have been answered and not a counter-offer. 5. Sale to Sunita As the letter either has no contractual effect as acceptance was not communicated, or was a mere enquiry and not a counter-offer, it is submitted that Rob was not free to sell the car to Sunita when she made her contract on Wednesday morning. Rob knew that he had given Tom until Wednesday evening to accept his earlier offer over the car and so could not sell the car to another until Thursday. However, if Tom still wishes to purchase the car for �5,000 and can pay the money immediately, it is submitted that he can force Rob to sell the car to him. As the car is a vintage car, damages for breach of contract may not be an adequate remedy and may not even be calculable, so a court may order specific performance of the contract. Naturally, Rob would also be in breach of the implied term in his contract with Sunita, namely that he had good title to the car he was selling, as stated in the s12 of the Sale of Goods Act (1979) 17. He would also be liable for damages caused to her. WORDS: 1284 6. ...read more.