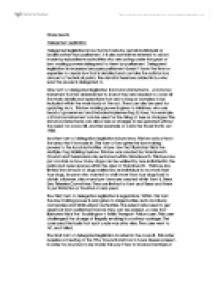 Clare Beavis Delegated Legislation Delegated legislation is law that is made by certain individuals or bodies rather than parliament. It is also sometimes referred to as law made by subordinate authorities who are acting under the grant of law- making powers delegated to them by parliament. Delegated legislation is necessary because parliament doesn't have the time or expertise to create law that is detailed and contains the satisfactory amount of technical points. The detail is therefore added in by who ever the power is delegated to. One form of delegated legislation is statutory instruments. A Statutory Instrument is often abbreviated to SI and they are needed to cover all the main details and operations that are to long or complex to be included within the main body of the act. They can also be used for updating Acts. This law making power is given to Ministers, who are head of government and includes implementing EU laws. For example a Statutory Instrument can be used for the fixing of fees or charges. The Statutory Instruments can allow fees or charges to be updated without the need for a new Bill. Another example of a SI is the Road Traffic act 1988. ...read more.

However, there needs to be some control over delegated legislation other wise the law would be to rigid. One control would be about consultation. There needs to be a period of consultation that takes place when laws are made by people other than those in parliament. Consultation has to take place with experts and with those who are most likely to be affected by the provisions once they have been made enforceable. There is also a requirement for the publication of a draft of the proposed rules. Another control over delegated legislation is one that is exercised by the courts. This control is made by a procedure called Judicial Review. Judicial Review is about the validity of the rules made. This relates to the intra and ultra vires, which is whether the rules in question have been made within or beyond the powers granted by parliament in the Enabling Act. There are two different types of ultra vires, procedural and substantive. Procedural: Instruments will be held to be ultra vires if a mandatory procedural requirement has not been followed, but will not be if the procedure is only directory. Substantive: SIs are substantively ultra vires if they impose a tax, interfere with the basic rights of subject e.g. ...read more.

This vote is taken with a specified time which is either 28 or 40 days. Parliament must approve it as drafted, annual or withdraw the Statutory Instruments. They do not have the power to amend it. Due to this only a very small number of SI's are made under the affirmative resolutions procedure. The last draft that was subject to the affirmative procedure related to parliamentary constituencies and was rejected by the House of Commons. However, a negative resolution procedure is slightly different. Any SI that is not passed by the affirmative resolution will become subject to this method. The SI's in this procedure will become law unless parliament rejects in within 40days. The last negative resolution procedure was passed by the House of Lords and was related to the Greater London Authority Election Rules. The last control over delegated legislation is the joint committee on Statutory Instruments, also called the Scrutiny Committee. Scrutiny Committee's give a more effective check on all delegated legislation that is trying to passed. Its purpose is to review all statutory instruments and to draw both houses attention to anything they believe should be reconsidered. They check taxes and charges and make sure that they do not contain any ultra vires. The committee is not allowed to amend the SI's, but are only there to make sure that matters of concern are brought to both houses attention. ...read more.