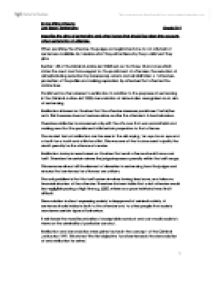 Describe the aims of sentencing and other factors that should be taken into account when sentencing an offender.

Describe the aims of sentencing and other factors that should be taken into account when sentencing an offender. When punishing the offender, the judges or magistrates have to not only look at sentences available, but decide what they will achieve by the punishment they give. Section 142 of the Criminal Justice Act 2003 sets out for those 18 and over which states the court must have regard to; the punishment of offenders, the reduction of crime(including reduction by deterrence), reform and rehabilitation of offenders, protection of the public and making reparation by offenders that affected the victims lives. Punishment is often referred to retribution. In addition to the purposes of sentencing in the Criminal Justice Act 2003, denunciation of crime is also recognised as an aim of sentencing. Retribution is based on the idea that the offender deserves punishment for his/her acts. This however does not reduce crime or alter the offender's future behaviour. Therefore retribution is concerned only with the offence that was committe3d and making sure that the punishment inflicted is in proportion to that offence. ...read more.

It reinforces the moral boundaries of acceptable conduct and can mould society's views on the criminality of particular conduct. Retribution and denunciation were prime factors in the concept of the Criminal Justice Act 1991. This stated 'The first objective for all sentences is the denunciation of and retribution for crime.' However this aim of sentencing is not included in the purpose of sentencing set out in the Criminal Justice Act 2003. Incapacitation serves a purpose for society as a whole, or helps the offender in some way. All Incapacitation is; that the offender is made incapable of re-offending. In our penal system a long custodial sentence is the usual method; encouraged by our sentencing legislation, as a custodial sentence should be used where the offence is a violent or sexual offence. Electronic tagging of offenders is a method of protecting the public from the offender without having to send the offender to prison. There is also a move to using community-based sentences that will incapacitate the offender in the short term and protect the public. ...read more.

Then there is rehabilitation which aims to reform the offender and rehabilitate him/her into society, in hope that they will not reoffend in the future. To rehabilitate drug abusers there are many community sentences- drug testing and treatment orders and drug abstention orders. Reformation is very important in the sentencing of young offenders. Reparation aims to compensate the victim of the crime usually by ordering the offender to pay a sum of money. The idea is to show that criminals should pay compensation to the victims of their crimes. Under section 130 of the Powers of Criminal Courts (Sentencing) Act 2000 courts are under a duty to give reasons is they do not make a compensation order. The concept of restitution includes making reparation to society as a whole. This can be seen as the offender is required to do so many hours of work unpaid on a community project, under the supervision of a probation service. Note: Needed to mention other factors such as past records etc... ?? ?? ?? ?? By Ka-Shing Cheung Law Essay: Sentencing Grade (B+) 1 ...read more.