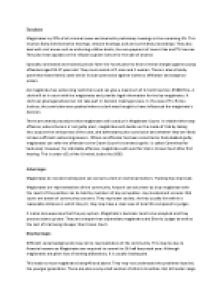 Describe the Funtions of Magistrates

﻿Functions Magistrates try 97% of all criminal cases and deal with preliminary hearings in the remaining 3%. This involves Early Administrative hearings, remand hearings, bail and committal proceedings. They also deal with civil issues such as enforcing utilities debts, the non-payment of council tax and TV licences. They also hear appeals on the refusal to grant licence for the sale of alcohol. Specially nominated and trained justices form the Youth panel to hear criminal charges against young offenders aged 10-17 years old. They must consist of 1 man and 1 woman. There is also a Family panel that hears family cases which include protection against violence, affiliation and adoption orders. ...read more.

There are several procedures that magistrates will conduct in Magistrate Courts. In triable either way offences, where there is a ?not guilty plea?, magistrates will decide on the mode of trial by taking into account the seriousness of the case, and defendants prior conviction and whether they are likely to have sufficient sentencing powers. Where an offender has been convicted or had pleaded guilty, magistrates can refer the offender to the Crown Court for sentencing this is called Committal for Sentence). However, for indictable offences, magistrates will send for trial in Crown Court after first hearing. This is under s51 of the Criminal Justice Act 2003. ...read more.

Magistrate?s decisions tend to be accepted and they process claims quicker. They are cheaper than stipendiary magistrates and District Judges as well as the cost of trial being cheaper than Crown Court. Disadvantages Different social backgrounds may not be representative of the community. This may be due to financial reasons as Magistrates are required to commit to 26 half days each year. Although magistrates are given loss of earning allowances, it is usually inadequate. This leads to most magistrates being 40 and above. They may not understand the problems faced by the younger generation. There are also a very small number of ethnic minorities. But still wider range of backgrounds compared to judges. Training may be insufficient. Sentencing may differ in similar cases in different areas. Police may be favoured as they automatically believe police evidences. ...read more.