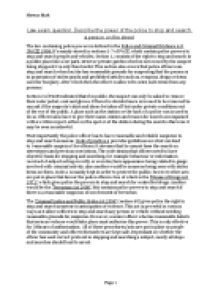 ﻿Sheena Shah Law exam question: Describe the power of the police to stop and search a person on the street The law containing police powers is defined in the Police and Criminal Evidence Act (PACE) 1984. It?s mainly stored in sections 1-7 of PACE, which contain police powers to stop and search people and vehicles. Section 1, consists of the right to stop and search in a public place like a car park, street or private garden which is not owned by the suspect being stopped, it is only then lawful. This section also covers that police officers can stop and search when he/she has reasonable grounds for suspecting that the person is in possession of stolen goods and prohibited articles such as, weapons, drugs or items used for burglary. ...read more.

A place such as the station or the back of a police van is used to do so. Officers also have to give their name, station and reason for search accompanied with a written report, either on the spot or at the station during the search otherwise it may be seen as unlawful. Most importantly the police officer has to have reasonable and reliable suspicion to stop and search someone. Code of practice A provides guidelines on what can lead to ?reasonable suspicion? for officers. It stresses that he cannot base the search on stereotypes and previous convictions. The code strains that officers need to have objective basis for stopping and searching, for example behaviour or information received of subject acting covertly or even his/hers appearance being related to gangs involved with criminal activity, also another would be someone being seen with stolen items on them. ...read more.

Another would be the ?Terrorism Act 2000?, this contains police powers to stop and search if there is a reasonable suspicion of involvement of terrorism The ?Criminal Justice and Public Order Act 1994? (section 60) gives police the right to stop and search someone in anticipation of violence. This act is powerful in various ways as it allows officers to stop and search any person or vehicle without needing reasonable grounds for suspicion. However, a senior officer who has reasonable beliefs that serious violence would take place must authorise this power. This is only effective for 24hours of authorisation. All of these procedures/acts are put in place so people of the community and officers themselves are kept safe. Dependant on whether the officer has used correct protocol in stopping and searching a subject, nearly all stops and searches should lead to arrest. Page ...read more.