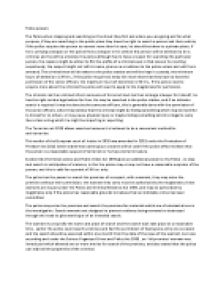 Describe the Powers of the Police to Search and Arrest.

﻿Police powers The Police when stopping and searching on the street they first ask where you are going and for what purpose, if they are searching in the public place they have the right to search a person and their vehicle, if the police requires the person to remove more than his coat, he should be taken to a private place, if he is carrying a weapon or the police finds a weapon in his vehicle the person will be believed to be a criminal, and he will be arrested, the police although has to have a reason for searching the particular person, the reasons might be either he fits the profile of a criminal seen in that area or he is acting suspiciously, the suspect might not tell his name ,phone no or address to the police unless and until he is arrested .The criminal then will be taken to the police station and will be kept in custody, the minimum hours of detention is 24 hrs., if the police requires to keep him more than that they have to have the permission of the senior officers, the maximum hours ...read more.

these warrants are issued under the Police and Criminal Evidence Act 1984, and may be authorized by magistrates only if the police has reasonable grounds to believe that an indictable crime has been committed. The police may enter the premises and search the premises for materials which are of substantial use in the investigation. Search warrants are designed to prevent evidence being removed or destroyed through the need to give warning or of an intended search. The warrant must specify the name and place of search and the search took take place at a reasonable time , earlier the police could search premises and had the permission of having one entry one occasion and the search should be executed within one month from the date of the issue of the warrant, but now according and under the Serious Organized Crime and Police Act 2005 , an ??all premises? warrant was introduced which allowed one or more entries for search of the premises, and also stated that the police can seize all the properties of the criminal. ...read more.