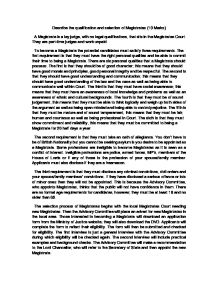 Describe the qualification and selection of magistrates

There are no formal age requirements for candidates, however, they must be at least 18 and no older than 65. The selection process of Magistrates begins with the local Magistrates Court needing new Magistrates. Then the Advisory Committee will place an advert for new Magistrates in the local area. Those interested in becoming a Magistrate will download an application form from the Ministry of Justice website; they will also download the DVD. Applicants will complete the form to reflect their eligibility. The form will then be submitted and checked for eligibility. The first interview is just a general interview with the Advisory Committee during which eligibility will be checked again. The second interview will include practical examples and background checks. The Advisory Committee will make a recommendation to the Lord Chancellor, who will refer to the Secretary of State and then appoint the new Magistrate. ...read more.