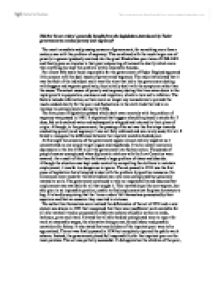 Did the 'lower orders' generally benefit from the legislation-introduced by Tudor government to combat poverty and vagrancy?

Did the 'lower orders' generally benefit from the legislation-introduced by Tudor government to combat poverty and vagrancy? The most immediate and pressing concern of government, for something more than a century was with the problem of vagrancy. This combined with the much larger one of poverty in general gradually evolved into the great Elizabethan poor laws of 1598-1601 and finally gave an impetus to that great outpouring of mercantile charity which more than anything else kept the problem within reasonable bounds. For almost fifty years those responsible for the government of Tudor England appeared little concern with the dual issues of poverty and vagrancy. The majority believed that it was the fault of the individual and it was this view that led to the government dealing with beggars and vagrants punitively, they initially dealt with the symptoms rather than the cause. The actual causes of poverty and vagrancy during this time came down to the rapid growth in population, enclosure and migration, which in turn led to inflation. The factors include reformation, as there were no longer any monasteries to provide the much-needed charity for the poor and fluctuations in the cloth trade that led to an increase in unemployment during the 1520s. The first piece of legislation passed which dealt even remotely with the problem of vagrancy was passed in 1495. ...read more.

Throughout the Tudor period the main funds for the poor came from charitable authorities such as the church and merchants. Since the reformation merchants played a large role in raising money for the poor, although they like the government were probably not doing out of kindness, but security, again the government benefited. When Elizabeth came to the throne in 1558, the parliamentary attitude to poor relief had changed little since the days of her father. The main act governing the county actions remained that of 1531. It distinguished between the able-bodied vagrants who were to be whipped and the impotent beggar who was to be relieved, but made no provision whatsoever for the man who desperately desired to be employed but had no job to go to. The governmental mind continued to be haunted by the fear of insurrection. It was at this juncture that the government took its first positive steps in the direction of a compulsory rate for the relief for the poor. Another act was passed in 1563, which followed the steps taken by larger cities such as London, Norwich and Ipswich. Also in the same year, the statute of artificer was passed. It dealt with the occupation a man could follow the training and the wages he could be paid. Those eligible for employment in one of the numerous industrial crafts were ordered to serve a 7-year apprentices. ...read more.

Without the generosity of the monarch class Tudor governments would have found the problem of poor relief far more onerous than in fact it was and the burden may have become insupportable. Therefore, Tudor government had little to deal with poverty. Its action had been limited to acts to the cloth trade and the punishment of beggars. All the legislation reflects the action of the government cautiously groping its way towards a method that would at once remove the threat of insurrection and provide adequate care for all categories of the poor. The Tudors were not prepared to innovate in this respect. They wanted proof that methods were workable before they introduced them, the larger towns, particularly those of London and Norwich anticipated governmental legislation in almost every respect and provided visible evidence of the success of more humane methods of poor relief. Ideally, this 'freezing' of the agricultural situation as it was at the beginning of Elizabeth's reign should have been beneficial to the poor. Protection from the evils of enclosure, assuming that such evils did in fact exist, coupled with effective legislation can only have been beneficial to the increasing number of rural wage earners, but in reality such a scheme was a non-started from the outset. Men against whose own self-interest its prescription ran, surely with full knowledge that it was unenforceable, in such circumstances its efforts must have been minimal' passed it. ...read more.