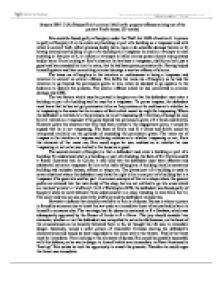 January 2005: 2 (A) Discuss Eric's criminal liability for property offences arising out of the party at Fred's house. (25 marks) Eric could be found guilty of burglary under the Theft Act 1968 of section 9. A person is guilty of burglary if: a) he enters any building or part of a building as a trespasser and with intent to commit theft, inflict grievous bodily harm, rape or do unlawful damage therein; or b) having entered any building or part of a building as a trespasser he steals or attempts to steal anything or that part of it, or inflicts or attempts to inflict on any person therein any grievous bodily harm. From looking at Eric's situation he has been a trespasser, (s9.1b) as he's just a guest and has exceeded his limit to entry, that he had been given permission for. ...read more.

However given the situation that Eric had been invited to the engagement party, it could be argued that he is not trespassing. The facts of Eric's and R v Jones and Smith could be interpreted similarly on the grounds of exceeding the permission given. The mens rea of trespass is the intention to trespass and being reckless as to whether trespassing or not. From the elements of the mens rea, Eric could argue he was reckless as to whether he was trespassing or not as he was invited to the house as a guest. The second element of burglary is that a defendant must enter a building or part of a building. To understand what is a building, or part of a building, the facts of R v Collins and R v Ryans illustrates this. In Collins it was held that the defendant must have effective and substantial entry as a trespasser for him to be liable of burglary. ...read more.

Duress is where a person is forced by someone else to break the law under an immediate threat of serious bodily harm to himself or someone else. The two-stage test for duress is contained in R v Graham, which was subsequently approved by the House of Lords in R v Howe. The jury should consider two elements; whether or not the defendant was compelled to act as he did because, on the basis of the circumstances as he honestly believed them to be, he thought his life was in immediate danger. Secondly, would a sober person of reasonable firmness sharing the defendant's characteristics and would he have responded in the same way to the threats. Finally the threat must be immediate. From looking at the elements of duress, Eric could be possibly successful with this defence, as he was in danger to himself which was immendiate as Dave threatened to "beat up" Eric unless he took the opportunity to smash the presents. Therefore he could argue the threat was immediate. ?? ?? ?? ?? Jusna Begum - FE02 ...read more.