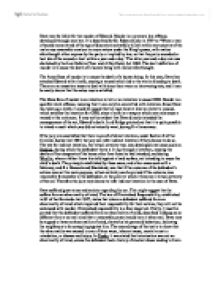 Discuss the Criminal Liability of Dave for the murder of Edward

The test for indirect intention, the virtual certainty test, was developed over cases such as Nedrick, during which the defendant threw a lit rag through a letterbox, causing the deaths of the occupants of the house other than those he had intended, and during Woollin, where a father threw his child against a hard surface, not intending to cause the child's death. The principle established by these cases, and other cases such as R v Moloney, and R v Hancock and Shankland, was that if the outcome of the defendant's actions was not his main purpose, virtual certainty can be proved if the outcome was reasonably foreseeable to the defendant, to the point at which it became a virtual certainty of the act. Therefore the jury may choose to infer indirect intention in the case of Dave. Dave suffered great stress and anxiety regarding his car. ...read more.

Two medical experts will have to provide evidence that Dave's abnormality of mind was caused in one of these ways. Stage three states that the abnormality must have been a significant cause of the action, and cases such as Gittens and more recently Dietschmann have stated that where the defendant was also intoxicated, the abnormality must still have been a significant cause, regardless of the intoxication. Finally, it must be proved that the abnormality significantly impaired the defendant's responsibility for their actions. It need not completely impair their responsibility. In Byrne for example, the defendant's impulses were not completely irresistible, and it was uncertain whether this meant he could use the defence. It must be proved the Dave was significantly impaired from his responsibility for his actions, if he intends to use the defence. If Dave is successful in using this partial defence, his charge will be substituted for one of manslaughter. This means he will not be subject to a mandatory life sentence, since manslaughter sentencing is up to life. ...read more.