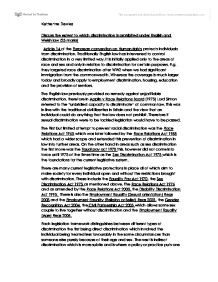 Discuss the extent to which discrimination is prohibited under English and Welsh law (25 marks) Article 14 of the European convention on Human rights protects individuals from discrimination. Traditionally English law has intervened to control discrimination in a very limited way, it is initially applied only to the areas of race and sex and only in relation to discrimination for certain purposes. E.g. they targeted race discrimination after WW2 when we had significant immigration from the commonwealth. Whereas the coverage is much larger today and broadly apply to employment discrimination, housing, education and the provision of services. The English law previously provided no remedy against unjustifiable discrimination, therefore in Applin v Race Relations Board (1975) Lord Simon referred to the "unbridled capacity to discriminate" at common law. This was in line with the traditional civil liberties in Britain and the view that an individual could do anything that the law does not prohibit. Therefore if sexual discrimination were to be tackled legislation would have to be passed. The First but limited attempt to prevent racial discrimination was the Race Relations Act 1965 which was later followed by the Race Relations Act 1968 which had a wider scope and extended this prevention of discrimination in law into further areas. ...read more.

Although the Sex Discrimination Act 1975 covers discrimination in employment, Tran sexuality is different to usual sex discrimination, if the man where to have registered his new gender the Gender recognition Act (2004) would have covered him but he was still in the planning stages. Some discrimination on the grounds of sex is lawful where the services provided are generally different from both men and women. Sex discrimination is also permitted for religion or the participants in single-sex sports or for annuities and insurance polices in which discrimination is reasonable. E.g. Women tend to live longer (life insurance), Female doctors; some women may ask to be seen by a female doctor. Females often pay lower driving insurance compared to their male counterparts. The Race Relations Act 1976 is the relative legislation for race discrimination and covers discrimination on the grounds of race/ colour and ethnic background in matters of employment, education, housing or the provision of services e.g. hotels. The Race Relations (amended) Act (2000) was passed because of the Macpherson Report which required public bodies to become more pro-active in terms of promoting racial equality E.g. the police. Examples of direct racial discrimination include Lambeth LBC v CRE where the council advertised a job vacancy for a manager or assistant manager in their housing benefits departments, and specified that only ...read more.

the applicants who are accusing them of discrimination cannot afford to pay for their own solicitor which highlights, the lack of legal aid. Simply they must fund their own case. There is also a lack of expertise that tribunal members have of discrimination cases, this is worse for applicants as the tribunal will not be much help to them. Over the last few years the influence of EU law on British law has been pretty obvious in the terms of sex discrimination, along with the implementation of the Equality Framework Directive recently. These two measures both aid to push law in the right direction in relation to discrimination on all levels. Also the Equality Act 2006 has replaced both equal the opportunities commission and the commission for racial equality with equality and the human rights commission. This new system has powers to enforce rules and regulations to launch pfficial enquires and investigations in to cases and it can also help the individual because it can take action on behalf of the person in question, it also provies advice with a new help line being set up and the government is also working towards creating s=a signle equality legislation e.g. The Equality Act 2010 Therefore discrimination is widely prohibited amongst law in England and Wales . ?? ?? ?? ?? Katherine Davies ...read more.