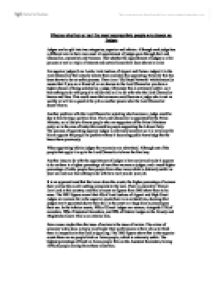 Discuss whether or not the most appropriate people are chosen as judges Judges can be split into two categories; superior and inferior. Although each judge has a different role in their own court all appointment of judges goes through the Lord Chancellor, currently Lord Falconer. But whether the appointment of judges is a fair process or not is a topic of interest and certain biases have been shown to exist. For superior judges (Law Lords, Lord Justices of Appeal and Puisne Judges) it is the Lord Chancellor that actually selects them and does the appointing. However this has been shown to be an unfair process. There is an 'Old Boys Network' which basically means that if you are a friend of, or are known to the Lord Chancellor you have a higher chance of being selected as a judge. ...read more.

The process of appointing superior judges is extremely secretive so it is very easy for him to appoint the people he prefers without it becoming public knowledge that he knew them previously. When appointing inferior judges the vacancies are advertised. Although out of the people that apply it is up to the Lord Chancellor to have the final say. Another issue to do with the appointment of judges is how sexist and racist it appears to be as there is a higher percentage of men than women as judges, and a much higher percentage of white people than people from other races which is distinctly unfair as your sex and race has nothing to do with how well you do your job. ...read more.

The 2002 figures show that in the superior courts there are no people black or Asian people, which is extremely unfair. The highest percentage of black or Asian people falls on the Assistant Recorders, having 5.8% of people coming from these minorities. By looking at the information it is evident that the most appropriate people are definitely not chosen as judges. The basis from which they are selected is extremely biased whether this be by the Lord Chancellor and his 'Old Boys Network' or the issue of someone's sex and/or race. Whether you know the Lord Chancellor or are a white male does not in any affect how good you are at your job so whilst the selection process s this biased we may not be presented with the best judges possible. ...read more.