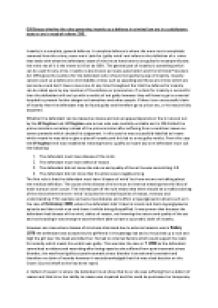 Discuss whether the rules governing insanity as a defence in criminal law are in a satisfactory state or are in need of reform.

﻿Q3 Discuss whether the rules governing insanity as a defence in criminal law are in a satisfactory state or are in need of reform. [50] Insanity is a complete, general defence. A complete defence is where the mens rea is completely removed from the crime; mens rea is Latin for ?guilty mind? and refers to the definition of a crime that deals with what the defendants state of mind must have been to be guilty for example Murder, the mens rea of it is the intent to kill or do GBH.. The general part of insanity Is something which can be used for any crime. Insanity is also known as insane automatism and the Criminal Procedure Act 1991 gives the outlines for the defendant who is found not guilty by way of insanity. Insanity cannot count as a defence to strict liability crimes such as speeding and these are crimes which are less serious and don?t have a mens rea. At any time throughout the trial the defence for insanity can be called upon by any member of the defence or prosecution. If a claim for insanity is successful then the defendant will end up with a verdict of not guilty however they will have to go to a mental hospital to prevent further danger to themselves and other people. ...read more.

He had no internal factors which could support his claim for insanity which meant his verdict was guilty. This was also the case in T 1990 as the defendant committed a robbery and wounding after being raped as she suffered from post-traumatic stress disorder, she was found guilty as post-traumatic stress disorder is an external constraint and therefore no claim of insanity however it was acknowledged that this was a bad decision on the Crown Courts behalf as she had been raped. A ?defect of reason? is where the defendant must show that he or she was suffering from a defect of reason and that his or her ability to reason was impaired and this could be permanent or temporary. However there are clear stipulations that things like confusion or lack of concentration cannot count, therefore meaning that a defendant who still possessed those powers but failed to use them cannot be classed as insane. For example Clarke 1972 was a depressed shoplifter who pleased a lack of mens rea due to confusion and absentmindedness resulting from depression. She pleaded not guilty when the judge confronted her about her state of mind at the time however she was finally found guilty as absentmindedness cannot count as a defect of reason as she was still able to reason with the situation but decided against it. ...read more.

The final rule is that the defendant must be able to prove that he did not know that what he was doing was wrong in the eyes of the law. In simpler terms it just means that he did not know that he was committing a crime. One case where the defendant tried to claim insanity but did not have a successful appeal was in Windle 1952 as the defendant killed his wife by giving her over 100 aspirin tablets, there was a suggestion that he had some kind of mental illness, but when he was talking to the police he said ?I suppose they will hang me for this? which shows that he knew what he did was wrong and that there would be consequences for his actions. He was therefore found guilty of murder. Another case was Sullivan 1984 where the defendant suffered from epilepsy and was charged with s.47 ABH caused whilst having a fit at his friend?s house, he attacked his friend whilst in the course of the fit which later passed. He was found guilty only due to the fact that he pleaded guilty and didn?t want to go to a mental hospital and would prefer to go to prison. He was proved to have not known what he was doing was wrong as during an epileptic fit all your understanding and reasoning goes out of the window and you don?t know what you are doing and whether it is right or wrong. ...read more.

The student addresses the disease of the mind aspect of the offence, and related criticisms, well.

To improve the essay, reference could be made to presumption of sanity and burden of proof; the issue of the "nature and quality of the act"; and knowledge that the act was wrong.