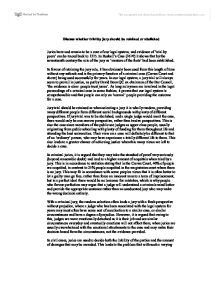 Discuss whether trial by jury should be retained or abolished.

Discuss whether trial by jury should be retained or abolished Juries have and remain to be a core of our legal system, and evidence of 'trial by peers' can be traced back to 1215. In Bushell's Case (1670) it shows that by the seventeenth century the role of the jury as 'masters of the facts' had been established. In favour of retaining the jury role, it has obviously been used from this length of time without any setback and is the primary function of a criminal case (Crown Court and above) being used successfully for years. In our legal system, a jury trial will always seem to prevail in justice, as put by David Bean QC ex-chairman of the Bar Council, 'the evidence is clear: people trust juries'. As long as laymen are involved in the legal proceedings of a criminal case in some fashion, it proves that our legal system is comprehensible and that people can rely on 'normal' people providing the outcome for a case. Jury trial should be retained as when selecting a jury it is wholly random, providing many different people from different social backgrounds with plenty of different perspectives. If jury trial was to be abolished, and a single judge would merit the case, there would only be one narrow perspective, rather than twelve perspectives. ...read more.

In civil cases, juries are used to decide both the liability of the parties and the amount of damages that may be awarded. This leads to the problem that with such a varying background of individuals in the jury, there will be misconceptions to how much money is appropriate for the case, and there are extreme cases of over-awarding damages, or awarding too little damages in cases. This is subject to many external problems, such as the case may have received media attention, therefore members of the jury may already have perceived conceptions about one of the parties. In a civil case, the Court of Appeal previously had no power to correct awards which they thought may have been too high or too low, which perhaps led to one cases in 1989 where Lord Aldington was awarded �1,500,000 - in relation to a personal injury case this size of award may only be capable to a person who had been severely and permanently disabled. In 1990, Parliament enacted section eight of the Courts and Legal Services Act 1990 which case the Court of Appeal special powers in such cases as over compensation, etc. This would allow the Court of Appeal to order a new trial or substitute a new sum which they deem as more appropriate to the factors involved. ...read more.

Disadvantages of a jury in a criminal case are that they may have troubles comprehending the legal complexities in a case. In some cases, juries may be too unmotivated to understand the case, and since they are not required to have their decision justified, may just vote with the majority in order to end the case and resume their normal lives. Another problem with juries is that they also increase expenditure for the legal parties and take a lot more time than those in the Magistrates Court. Statistics suggest that an average of �14,000 is spent on a Crown Court trial, where a magistrate's trial contested is just �2,500. However, variance is expected. Perhaps a less observed problem with juries is that the jury service is compulsory and in some cases workers may lose out on opportunities in their normal life, and that attending jury service for them may be very costly. The expenses for undertaking the service will not provide an equivalent sum in most cases. As juries are left to such complexities of the law, it is important that there is a balance that they will be able to understand the case and make a rational decision while not being thrown by the legal jargon. If each individual member of the jury works together and discusses the evidence fully, there should be no problem with jury trial. ?? ?? ?? ?? ...read more.