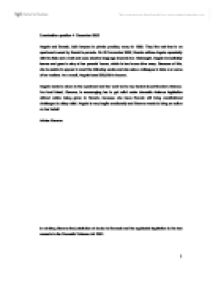 Examination question 4- December 2002 Angela and Brando, both lawyers in private practice, marry in 1990. They live rent-free in an apartment owned by Brando's parents. On 20 November 2002, Brando strikes Angela repeatedly with his fists and a belt and uses abusive language towards her. Distraught, Angela immediately leaves and goes to stay at her parents' house, which is two hours drive away. Because of this, she is unable to appear in court the following weeks and she asks a colleague to take over some of her matters. As a result, Angela loses $20,000 in income. Angela wants to return to the apartment and her work but is very fearful about Brando's violence. Her best friend, Gemma, is encouraging her to get relief under domestic violence legislation without notice being given to Brando, because she fears Brando will bring constitutional challenges to delay relief. Angela is very fragile emotionally and Gemma wants to bring an action on her behalf. Advise Gemma In advising Gemma the jurisdiction of choice is Grenada and the applicable legislation to the fact scenario is the Domestic Violence Act 2001. ADVICE TO GEMMA Can Gemma bring an action on behalf of Angela? Gemma as a 'best friend' is not covered by the statute to bring an action on behalf of Angela who is classified as a spouse under the statute. ...read more.

Section 2 of the statute states 'domestic violence by a person means abusive conduct directed towards a member of the person's household; or a spouse' Angela is married and therefore qualifies as a spouse under the statute and should be afforded the necessary protection. Do Brando's actions amount to domestic violence as defined by the Act? The difficulty arises here because the evidentiary burden is on Angela to prove that Brando's conduct amounts to domestic violence. The facts of the case indicate that Brando strikes Angela repeatedly with his fists and a belt and uses abusive language towards her on November 20 2002. There is no requirement in the statute for there to be a pattern of behaviour and therefore the one abusive act after ten years amounts to physical abuse which consecutively connotes domestic violence. The statute in its interpretation section (s 2) supports this view and suggests that domestic violence 'includes physical abuse, emotional or psychological abuse.' Even though it is unclear whether she was abused before November 20, 2002, the abusive actions directed towards Angela on that particular day are indicative of physical, emotional and psychological abuse; which of course includes persistent intimidation of the person by the use of abusive or threatening language. ...read more.

Furthermore, in section 22 the court on making these orders and for the protection of married life may recommend the parties to participate in counseling. One is in support of this option. Ancillary Relief The Grenadian Statute in section 15 speaks about the power of the courts to make ancilliary relief on or after making an application for an occupation order. However, the relief available in this statute is not widespread and mainly speaks of granting the use of furniture, household appliances or household effects, or if the applicant is dependent - financial support. It is ambiguous from the facts whether Angela was dependent on Brando. However, the shortfall of this section is that it does not provide compensation for monetary loss. In the Trinidad and Tobago statute compensation is provided for monetary loss incurred by an applicant as a direct result of the conduct that amounted to domestic violence. The compensation must not exceed $15,ooo and can include compensation for loss of earnings, medical and dental expenses, moving and accommodation expenses and reasonable legal costs including the cost of an applicant under the act. This would be beneficial to Angela since the facts have indicated that she has loss earning because of her inability to work. Regrettably, the most Angela would get in relief under the Grenadian statute is the use of the furniture and household appliances. 1 ...read more.