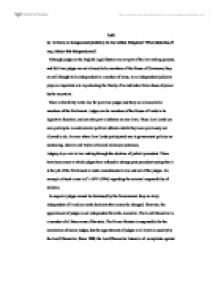 Law Q. Is there an independent judiciary in the United Kingdom? What obstacles, if any, hinder this independence? Although judges in the English Legal System are not part of the law making process, and full time judges are not allowed to be members of the House of Commons, they are still thought to be independent in a number of ways, as an independent judiciary plays an important role in protecting the liberty of an individual from abuse of power by the executive. There is flexibility in the law for part time judges and they are allowed to be members of the Parliament. Judges can be members of the House of Lords in its legislative function, and can take part in debates on new laws. ...read more.

The Prime Minister is responsible for the nomination of senior judges, but the appointment of judges at all levels is usually by the Lord Chancellor. Since 1998, the Lord Chancellor listens to all complaints against judges. According to the statistics, there have been 23 cases where he has either written to the judges directly or referred them to the concerned officers. Thus the judges have become pressurized and in such cases are not independent from the executive. The judges are protected from this pressure as the executives have no financial control over the judges. Therefore judges are financially independent, as their salary comes out of the consolidated fund and the Parliament does not interfere, but can make changes to retirement ages and pensions. Also, judges cannot be sued for the decisions they make in the course of their judicial duties. ...read more.

This case went to the House of Lords, where the Law Lords ruled in the women's favour, holding that the Minister had gone beyond his power in framing the bylaw so as to prevent access to common land. Recently ministerial actions have been challenged by way of judicial review. In many cases the judges have ruled against the minister concerned, e.g. R v Home Secretary, ex parte Fire Brigades Union (1995) in which the changes to the Criminal Injuries Compensation Scheme made by the Home Secretary were unlawful. In such cases the judiciary has played an important role in protecting individual rights. It can be seen that there is, to an extent, an independent judiciary. There are still certain obstacles, as mentioned above, hindering this independence which are being overcome, helping make the judiciary permanently independent in the United Kingdom. ...read more.