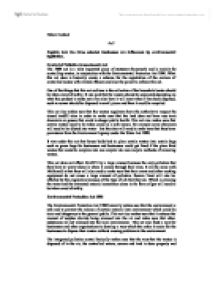 Explain how the three selected businesses are influenced by environmental legislation.

The 1989 act is a very important piece of statutory framework and is mainly for controlling wastes, in conjunction with the Environmental Protection Act 1990. What this act does is basically create a scheme for the registration of the carriers of controlled wastes with related offences and also the power to enforce this act.

One of the things that this act outlines is the collection of the household waste should be taken cared of safely. It also said that the wastes should be separated depending on what the product is made out of an also how it will react when it has been disposed, such as runner should be disposed in small pieces and then it could be recycled.

This act also makes sure that the wastes regulators have the authority to respect the closed landfill sites in order to make sure that the land does not have any toxic chemicals or gasses that could in danger public health. This act also makes sure that certain wastes need to be taken cared in a safe manor, for example some chemicals will need to be diluted into water   but the sites will need to make sure that they have permission from the Environment Agency under the Water Act 1989.

It was under this act that house holds had to place certain wastes into certain bags such as green bags for businesses and businesses could get fined if the place third wastes that could be recycles into non recycle into non recycle methods of removing wastes.

This act does not affect ALMTV by a large amount because the only pollution that they have to worry about is when it comes through their vans. It sis the same with McDonald is that they will also need to make sure that their ovens and other cooking equipment do not cause a large amount of pollution. Severn Trent will also be affected by this legislation because of the type of job that they do. Which is cleaning the water and the extracted material sometimes come in the form of gas will need to be taken cared of safely.

The Environmental Protection Act 1990 basically makes sure that the environment is safe and to prevent the release of certain material into environment which could be toxic and dangerous to the general public. This act also makes sure that it reduces the amount of sulphur dioxide being released into the air and make sure that other substances are not released into the local environment.  This act also finds a way for businesses and other organisations to develop a way which the make it easier for the businesses to dispose their wastes without causing problems to the environment.

The integrated pollution control basically makes sure that the way that the wastes is disposed of in the air, the controlled waters, sewers and land is done properly and without any problems. They mainly deal with large industries such as power plants, water and gas companies.

There is very little effect that this act would have on ALMTV partially because of the type of industry that they are in. it is also the same with McDonalds but this act greatly affects Severn Trent because they are basically a water company and they need to make sure that the wastes that they make is taken cared of and also that their waste removal company Biffa takes care of the wastes properly.

A good example of the Environmental Protection Act 1990 is Esso; this is because in 2003, Green Peach and Friends of the World protected against the company by chaining themselves on their fuel control centre after evidence had been found that they were disposing their wastes in an environment where a local community lived. This shown a clear violation of this acts because the process of the waste was not done properly and the general population would have been harmed.

The clean air came into power in 1956 because of the Great London Smog in December 1952 and this act basically made sure that businesses fumes are taken cared of properly and it also does not pollute the air. Another reason why this cat came into power was so that it aimed to control domestic sources of smoke pollution by introducing smokeless zones which is in every major city.

The clean air act 1968 also introduced the basic principle for the use of tall chimneys for industrial use and burn this is because the higher the chimney is, the greater the pollution could be reduced. This act is also liked with the Environmental Protection Act 1990 and this act had to come into power because the Environmental Protection Act does not stop businesses polluting the air.

A good example of the clean air act being enforced is the Carbon Trust because they made sure that all the major airlines pay extra to cover the cost of the fumes that their plain made. The Carbon Trust called this carbon neutralisation because it will balance the amount of waste that the plains made in the air.

The environment act 1995 basically creates a new system where the local authorities must make sure that all the waste sites in their area are fully registered and arrange remediation of containment sites. This act basically controls the containment of landfill sites in the local area and also it is under section two of the Environmental Protection Act 1990 that makes sure that the sites are identified and also maintained. At the moment, there are no enforced rules and regulation for the control of the containment lands and once the act has forced, the local authority will inspect the land on a monthly bases.

The local authority would see these containment lands as causing significant harm to the general public as well as harm to local animals and also harming people property. Containment land could also include having controlled waters that have been polluted and also if there is a possibility that the natural life have had harm caused.

This certain act was introduced in conjunction to the Anti-Social Behaviour Act 2003 and this Act is also linked with the Environmental Protection Act 1990. What this act does is basically provide powers to the local communities in dealing with unwanted noise. One of the reasons why this act came into power was to make sure that

This act basically makes sure those in local residential areas; no one is allowed to use their car horn from the hours of 11pm to 4 am. The penalties that the person that is making the noise will get will be fixed and will range from £50 fine to a £1000 depending on how bad the noise was.

There have had been some concern on the effectiveness of this certain legislation which was outlined by the Neighbourhood Noise Working Party in October 1994. They believe that the penalties that were offered and the amount of help that the local community received from this legislation did not help everyone and it would not stop youths making a large amount of sound area.

I believe that the three businesses that I have chosen will be effect by this act because the three businesses have trucks or vans that might cause a lot of noise. ALMTV also offer a Sound system and a DJ to their customers and they will need to make sure that they do not play loud music over a certain decibels. Severn Trent might be affected by this act because they their machines in the water plant might make a large amount of sound. McDonalds might be affected by this legislation by the amount of sound that their ovens and other machinery make.

A good example of the Noise Act working is in Middlesbrough in 2003 when a town centre nightclub used to play must till 4 in the morning were told to stop because they were in a residential area and they went over a certain amount of decibels.

This act mainly applies to power plants and also energy providing companies such as British Gas and owner and also what this act does is that they regulates the keeping and using of radioactive material. This act also makes sure that businesses dispose of the material property and without any problems or causing any danger to the general public. This act also makes sure that any person use the radioactive material must either be registered or be an exemption under the provisions of the Environmental Protection Act 1990.

This act has no affect on ALMTV and McDonalds because of the type of industry that they are in. However this act does affect Severn Trent because they use chemicals to remove the wastes and extract the water had also have it purified. Severn Trent also owns Biffa which is a company that disposes of wastes and they have to they this law because the wastes that they collect from businesses could have a toxic reaction.