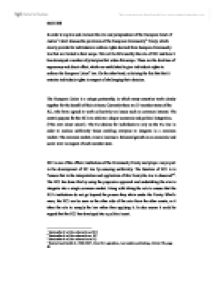 In order to explain and evaluate the role and jurisprudence of the European Court of Justice1 I shall discuss the provisions of the European Community2 Treaty, which clearly provide for individuals to enforce rights derived from European Community law that are limited in their scope. This will be followed by the role of ECJ and how it has developed a number of principles that widen this scope. These are the doctrines of supremacy and direct effect, which are established to give individuals rights to enforce the European Union3 law. On the other hand, criticising the fact that that it restricts individuals rights in respect of challenging their decision. The European Union is a unique partnership in which many countries work closely together for the benefit of their citizens. Currently there are 27 member states of the EU, who have agreed to work collectively on issues such as common interest. The central purpose for the EC is to achieve a deeper economic and political integration, ('The ever closer union'). The EU desires for individuals to rely on the EU law in order to enclose uniformity hence enabling everyone to integrate in a common market. The common market, aims to increase a balanced growth on an economic and social level in respect of each member state. ECJ is one of the official institutions of the Community Treaty and plays a major part in the development of EC law by ensuring uniformity. The function of ECJ is to "ensure that in the interpretation and application of this Treaty the law is observed"4. The ECJ has done this by using the purposive approach and undertaking the aim to integrate into a single common market. Along with taking the role to ensure that the EU's institutions do not go beyond the powers they attain under the Treaty. What's more, the ECJ can be seen as the other side of the coin from the other courts, as it takes the role to comply the law rather than applying it. ...read more.

Nevertheless, the Court was certainly influenced by the rebellion from the French Conseil d'Etat and the German Bundesfinanzhof. Anderson, writing at the time, commented that: "The present concern of the Court is to consolidate the advances of the 1970s rather than face the legal complexities and political risks of attempting to extend the doctrine further".23 It is likely in the light of Marshall, that decisions will also have vertical direct effect only. The ECJ's rejection to allow the horizontal direct effect of directives resulted in diminishing their effectiveness. In sequence to put this right they developed the doctrine of indirect effect24. This concept was first introduced in the cases of von Colson and Kamann v Land Nordrhein-Westfalen25 and Harz v Deutsche Tradax GmbH26, which came before the Court on the same day. The plaintiffs in both cases sought to invoke the provisions of Directive 76/207 (the Equal Treatment Directive) in almost identical circumstances. The distinction was that in von Colson the Directive was being invoked against the German prison service (a public body) and in Harz the Directive was being invoked against a private employer. The Directive in question had been implemented by the German authorities, but the implementing legislation did not appear to provide an adequate remedy as required by the Directive. The ECJ held that the national court was obliged to interpret the implementing legislation so as to give effect to the Directive. The case was referred back to the German Labour Court who re-interpreted the national law and awarded damages to the plaintiffs in both cases. The court went further in Marleasing SA v La Comercial Internacional de Alimentaci�n SA27 and held that the principle of indirect effect applied whether the national legislation being construed was enacted before or after the Directive. In that case the Spanish authorities made no attempt whatsoever to implement the Directive in question, so there was no question of assuming that the intention of the authorities had been to give effect to the Directive. ...read more.

A thorough essay, but the topic in question is not entirely clear.

It should be noted that the Article numbers need updating in view of the TFEU.