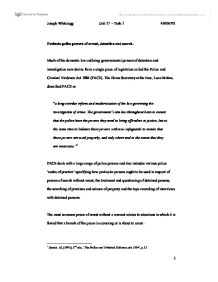 Evaluate police powers of arrest, detention and search. Much of the domestic law outlining governmental powers of detention and investigation now derive from a single piece of legislation called the Police and Criminal Evidence Act 1984 (PACE). The Home Secretary at the time, Leon Brittan, described PACE as "a long overdue reform and modernisation of the law governing the investigation of crime. The government's aim has throughout been to ensure that the police have the powers they need to bring offenders to justice, but at the same time to balance those powers with new safeguards to ensure that these powers are used properly, and only where and to the extent that they are necessary."1 PACE deals with a large range of police powers and also includes various police 'codes of practice' specifying how particular powers ought to be used in respect of powers of search without arrest, the treatment and questioning of detained persons, the searching of premises and seizure of property and the tape-recording of interviews with detained persons. The most common power of arrest without a warrant relates to situations in which it is feared that a breach of the peace is occurring or is about to occur: 'A constable has the power to arrest where there is reasonable apprehension of imminent danger of a breach of the peace. There is a breach of the peace whenever harm is actually done or is likely to be done to a person or in their presence to their property or a person is in fear of being so harmed through an assault, an affray, a riot, an unlawful assembly or other disturbance.'2 Many arrests are carried out in pursuance of a warrant of arrest granted by a magistrate under the terms of s1 of the Magistrates' Courts Act 1980. The issue of a warrant for a person who has, or is suspected of having committed an offence empowers the police to arrest. ...read more.

The Macpherson report dug deep into the case and made 70 recommendations aimed specially at improving police attitudes and handling with racism. The report famously stated that 'institutional racism' exists within the Metropolitan police force and that "consequential to this more people of a particular age group, sex, colour, have been targeted, stopped and searched."11 The Macpherson report addressed the issues involved and brought the public's attention to the unfairness that was served. The fact that it was addressed and criticised instilled confidence in the black community as well as other ethnic minority groups who also feared racism from the Metropolitan police force. Progression with the Steven Lawrence case in terms of justice being served increased public confidence in the police force which indirectly increased confidence in police stop and search procedures. The provisions relating to stop and search powers are debatable by many. There are significant reservations about the efficiency of the powers provided but overall they are a good way of bringing 'crime to light.'12 The stop and search powers that the police have are proven to be beneficial in many ways however insufficient they may be in others. The purpose of PACE is to create a balance, however it has failed in doing so in some instances. For example, under the Police Reform Act 2002 s.50, a uniformed police officer can require a person who has behaved in an anti-social manner to give their name and address. Failure to comply is an offence and may form the basis for an arrest under s. 25 of PACE. This is a significant extension of police powers, which could be abused to harass young people. Police officers, aware of the power they have, are therefore able to gain the name of address of any person they wish, legally. It is highly likely that this will be abused as they have to power to do so and whilst this is a moderate form of abuse and cannot be compared to more serious police offences, i.e. ...read more.

have confidence in the police force as there is no obvious discrimination against them and we often read in the newspapers of alleged police discrimination against ethnic minorities. Even the most productive and innovative ideas brought in by the government are unlikely to remedy perceived problems as it is difficult to change people's opinions and views. The steps taken by the government have had little effect so far however it takes time for such an effect to occur. The Metropolitan police force is constantly trying to recruit more ethnic minority officers in an attempt to boost relations and to put a stop to the view that the police force is institutionally racist. We can conclude that there is an overwhelming use of stereotyping in police discretion. Police make rapid judgements about a person's nature based on their physical appearance and we can see that there is no doubt that stop and search powers are used discriminately by the police. Although efforts are being made to reduce this discrimination, evidence shows that it still exists. Despite the negativity surrounding stop and search, the fact that a large number of people are stopped and searched should be encouraging to the general public. This is because there is constant criticism aimed at the police for not being out on the streets enough, trying to prevent crime before it occurs. Stop and search is one of the few policing methods used to prevent possible future crimes from happening and can be seen as an effective mechanism for both detecting and clearing up crime. Overall the powers given to the police service in relation to arrest, search, seizure, and detention are respectable. There are, as with all areas of law, certain grey areas but evidence shows that the police force makes a lot of discretionary decisions due to the ambiguity of rules and regulations. Therefore on the balance of evidence, it can be said that police powers need to be more comprehensible in order to form a wider understanding. ...read more.