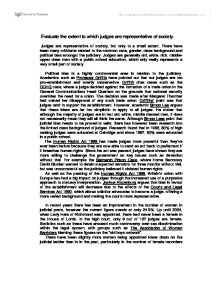 Evaluate the extent to which judges are representative of society.

Evaluate the extent to which judges are representative of society. Judges are representative of society, but only to a small extent. There have been many criticisms related to the common race, gender, class background and political bias amongst the judiciary. Judges are generally old, white, rich, middle-upper class men with a public school education, which only really represents a very small part of society. Political bias is a highly controversial area in relation to the judiciary. Academics such as Professor Griffith have pointed out that our judges are too pro-establishment and overtly conservative. Griffith cites cases such as the GCHQ case, where a judge decided against the formation of a trade union in the General Communications Head Quarters on the grounds that national security overrides the need for a union. The decision was made after Margaret Thatcher had voiced her disapproval of any such trade union. Griffiths' point was that judges tend to support the establishment. ...read more.

As well as the passing of the Human Rights Act 1998, Britain's union with Europe has had a big impact on judges through the increased use of a purposive approach to statuary interpretation. Joshua Rozenburg argues that bias in favour of the establishment will decrease due to the effects of the Courts and Legal Services Act 1990, which allows solicitor advocates to become a judge, offering a more varied background and making the courts more representative. In recent years there has been an improvement in the number of women in judicial posts, however the current figure stands at only 24.9%. Up until 2004, when Lady Hale of Richmond was appointed, there had never been a female in the House of Lords. In the high court, only 9 out of 107 judges are female. Statistics such as these have aroused much controversy over sex discrimination within the legal system, with groups such as The Association of Women Barristers blaming these figures on the "old boys network". ...read more.

It is obvious that the appointments system needs an urgent overhaul if we are to start seeing any change in the future amongst the judiciary with regards to diversity in social class, gender and race. In 2001 the Judicial Appointments Committee was set up, but has thus far failed to adequately address the current problems and presently has no role in the making or recommending of appointments. However, the current Constitutional Reform Bill proposes an Independent Judicial Appointments Commission which would aim to appoint a more socially diverse judiciary in the future. However, this new body would still only be able to make recommendations and would not have a role in the actual appointment of judges to the Supreme Court. Judges are generally old, middle classed men with a public school education. Whether they all think the same is debatable, but in terms of physically representing society it is clear that our current judiciary does not represent a vast part of the population including women and those in ethnic minorities. ?? ?? ?? ?? ...read more.

This essay never really drills down on the real issues to do with under-representation of women and ethnic minorities.