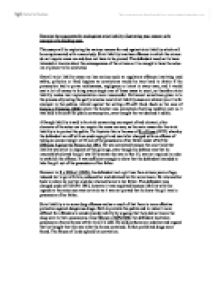 Examine the arguments for and against strict liability illustrating your answer with example of s deciding case.

Examine the arguments for and against strict liability illustrating your answer with example of s deciding case. This essay will be exploring the various reasons for and against strict liability which will be complemented with a case study. Strict liability involves offences in which the crimes do not require mens rea and does not have to be proved. The defendant need not to have intended or known about the consequences of the crimes as it is enough to have the actus rea at present to be convicted. Overall strict liability cases are less serious such as regulatory offences involving road safety, pollution or food hygiene as convictions would be very hard to obtain if the prosecution had to prove recklessness, negligence or intent in every case, and it would cost a lot of money to bring every single one of these cases to court, so therefore strict liability makes law implementation more resourceful. Parliament sometimes gives in to the process of proving the guilty mind as most strict liability cases are statutory as it is for example in the publics interest against the selling off unfit food. Such as the case of Callow v Tillstone (1900) ...read more.

the defendants charged of selling a lottery ticket to and underage boy. They appealed however it was held that obligation of strict liability would encourage better awareness in preventing commissions of such an offence. The public also is protected from unsafe buildings for example in the case of Atkinson v Sir Alfred McAlpine 1974 building company were convicted under the Asbeston Regulations for failing to state that it was using crocidolite, even thought it was unaware of this fact. Likewise in Gammon v AG for Hong Kong 1984, the defendants were found accountable when a part of the building, they were helping to construct collapsed, even though the company was oblivious that the plans were not being followed. There are however many negative qualities of using strict liability the major one is that a criminal conviction is imposed to a company of person in which they did not foresee making them helpless. However a reason against strict liability is that the courts themselves often face problems in identifying such offences as many statutes are not clear whether an offence of strict liability has been created ands that strict liability goes against the saying that a person is innocent until proven guilty, like in the case of Gammon V AG for Hong Kong 1984. ...read more.

There are many problems with the way that strict liability is currently forced. In some case I have also shown that in some cases the imposition of strict liability can be both unfair and unjust. Problems with strict liability include that it may not be successful in raising standards as people often do not realise that they are wrongdoing, decisions are often unfair and unjust, and there is also complexity in identifying strict liability offences and inconsistency with their attitude and decisions. Judgements often lack clarity and decisions with regard to strict liability which can lead to conclusions that are the opposite of what was intended by the law. A massive penalty and criminal conviction are imposed on the defendant for an offence even thought they may not have been able to foreseen/intended or been able to prevent. However strict liability ensures that the public is protected from unfit food. The public and countryside is better protected against pollution. People are discouraged from possessing unlawful weapons and drugs. The public is protected against hazardous buildings. People attempt to improve standards so they are not to be liable for committing a criminal offence. To conclude strict liability is essential in society as there would be a devastating and damaging effect if it was eliminated, but the statutes should be worded with great consideration to stop some confusion. ...read more.