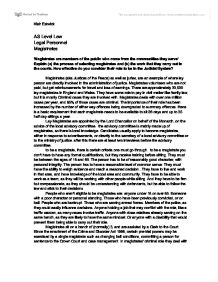 Explain (a) the process of selecting magistrates and (b) the work that they carry out in the courts. How effective do you consider their role to be in the Judicial System?

AS Level Law Legal Personnel Magistrates 'Magistrates are members of the public who come from the communities they serve' Explain (a) the process of selecting magistrates and (b) the work that they carry out in the courts. How effective do you consider their role to be in the Judicial System? Magistrates (aka Justices of the Peace) as well as juries, are an example of where lay person are directly involved in the administration of justice. Magistrates volunteers who are not paid, but get reimbursements for travel and loss of earnings. There are approximately 30,000 lay magistrates in England and Wales. They have some role to pay in civil matter like family law, but it is mostly Criminal cases they are involved with. Magistrates deals with over one million cases per year, and 95% of those cases are criminal. The importance of their role has been increased by the number of either way offences being downgraded to summary offences. there is a basic requirement that each magistrate needs to be available to sit 26 days and up to 35 half day sittings a year. Lay Magistrates are appointed by the Lord Chancellor on behalf of the Monarch, on the advice of the local advisory committee. ...read more.

In magistrates' criminal role they deal with summery offences and triable either way offences. The maximum sentence that can be imposed by magistrates is a fine of 5000 pounds, or 20000 for businesses, and 12 months of imprisonment. Magistrates decide on application for bail. They decide whether cases should be adjourned. They determine guilt or innocence. They pass sentences on those found guilty. They can commit defendants' to the crown court for sentence if they consider their own sentencing powers insufficient for the case, i.e. if they think the defendant should have a longer sentence or a bigger fine. They enforce financial penalties. They determine the mode of trial for triable either way offences. They can sit in the crown court with a judge to hear appeals from the Magistrates Court. They can also hear cases in the youth court- but there must a be a specially trained magistrate and the youth panel must be composed of at least one male and one female justice of the peace. There are many advantages of having magistrates. One advantage is said to be the cost. Magistrates are unpaid volunteers, who only get money for loss of earnings and travel. So they are said to be a lot cheaper then District Judges who get 90,000 pounds per year, and magistrates only costing 495 pounds per year. ...read more.

Third, co-option of citizens. And fourth, an election like how it is in the US. Another disadvantage of magistrates is that they have inadequate training. Magistrates do not have formal qualifications like district judges so magistrates may become over reliant on the clerk of the court. Another criticism is that magistrates are biased towards convictions, the prosecution and police evidence. Magistrates are often perceived to be pro-police. This may be due to the fact that, as local citizens, sitting in a local court, over the years they become familiar with the local police, and will therefore lean towards the evidence they give. Another criticism is that the magistrates give inconsistent sentencing. Differences in the level of sentencing is prevalent between different geographical areas as well as between magistrates in the same area. DJ's tend to give custodial sentences more than magistrates. Although there are many criticisms, having lay magistrates is important in the judicial system. They remain an important way of keeping costs down in the criminal justice system. And they are ordinary people with local knowledge and can be understanding to more cases unlike some professional judges. It allows more people to be involved in the courts without having to have formal qualifications. And it allows for cases to have a more balanced decision. They remain an important way of keeping costs down in the criminal justice system. Kiah Estwick ...read more.