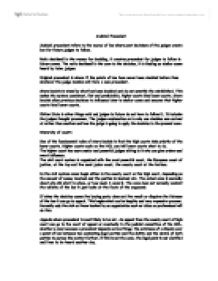 Judicial Precedent Judicial precedent refers to the source of law where past decisions of the judges create law for future judges to follow. Ratio decidendi is the reason for deciding, it creates precedent for judges to follow in future cases. The ratio decidendi is the core to the decision, it is binding on similar cases heard by later judges. Original precedent is where if the points of law have never been decided before then whatever the judge decides will form a new precedent. Stare Decisis is stand by what has been decided and do not unsettle the established. This makes the system consistent, fair and predictable, higher courts bind lower courts. Stare Decisis allow previous decisions to influence later in similar cases and ensures that higher courts bind lower courts. Obiter Dicta is other things said and judges in future do not have to follow it, It includes the judges thought processes, The judges explanation as to why one decision was arrived at rather than another and how the judge is going to apply the decision to the present case. ...read more.

two things, the existence of a dispute over a point of law between two contesting legal parties and the ability and the desire of both parties to pursue the matter further, if this is not the case, the legal point is not clarified and lives to be heard another day. Inferior courts are those below the high court level. They cannot establish precedent. They follow the rulings of the courts above them. The court of appeal civil and criminal are bound by their previous rulings to an certain extent. A ruling in young v Bristol aeroplane company led to a certain degree of flexibility. The house of lords is the highest court that sits in the UK. It sets precedent for all courts below it when dealing with English law. It does not always have to follow its own previous decision since the practice statement 1966 which allowed it some flexibility I this area. ...read more.

Advantages of precedent * Fairness - each case is treated the same if the facts are close enough to each other. * Consistency - There is consistency between cases that strengthens the system and also allows for some prediction of the result. * Saving time - The system Saves time for all those involved in the case. The arguments have already been analysed and decided upon. * Sources of law - Precedent produces a valuable source of law within which legal personal can operate. It provides a foundation for the legal system and is particularly useful for training lawyers. * Real life - case law is real life. Law that comes from this source is not subject to problems of drafting, which often occur with parliamentary legislation. * Inflexibility - instead of looking at each case afresh, Previous decisions have to be used. This might reduce freshness with which case is looked at. Disadvantages of precedent * Ridgity * Complexity * Illogical distinctions * Slowness of growth ...read more.