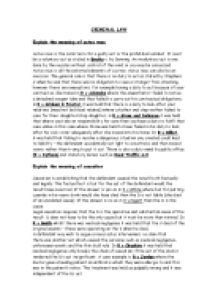 Explain the meaning of Actus reus and mens rea

﻿CRIMINAL LAW Explain the meaning of actus reus Actus reus is the Latin term for a guilty act or the prohibited conduct. It must be a voluntary act as stated in Bratty v by Denning. An involuntary act is one done by the muscles without control of the mind or you may be concussed. Actus reus is all the external elements of a crime. Actus reus can also be an omission. The general rule is that there is no duty to act as stated by Stephens J when he said that there was no obligation to save a stranger from drowning, however there are exemptions. For example having a duty to act because of your contract as illustrated in R v Adomako where the anaesthetist failed to notice a detached oxygen tube and thus failed to carry out his contractual obligations; in R v Gibbons & Proctor it was held that there is a duty to look after your relatives (need not be blood related) where a father and step mother failed to care for their daughter/step daughter; in R v Stone and Dobinson it was held that where you take on responsibility for care then you have a duty to fulfil that care unlike in this case where Stone was held to have failed in his duty to look after his sick sister adequately after she moved into his home. ...read more.

Explain the principle of coincidence of actus reus and mens rea (Contemporaneity rule) It is a general principle that crimes require the actus reus and mens rea to occur at the same time for liability. For example for a battery the D must apply unlawful force and have intended it or been reckless at the time. However, there are certain situations where the actus reus and mens rea may not start at the same time. It has been held that provided during the course of events they do coincide then the crime exists. This was illustrated in Fagan v MPC where the D drove onto the policeman?s foot ? here we have the actus reus of battery but no mens rea as D did not realise, however, when he was asked to move he refused and so at this point he had the mens rea and as the actus reus was still continuing there was a coincidence. Another situation is where there is a series of events which the courts have held as one single transaction and if the mens rea was present at the outset or throughout most of the events then it is deemed a coincidence. This was illustrated in R v Thabo-Meli where the D thought he had killed the victim but actually killed her when he tried to get rid of the body as he had the plan to kill from the outset the acts were treated as one transaction to kill. ...read more.

so the junior doctor in Wilsher was held not to have caused the baby?s blindness as it was only one of six possible causes. Explain whether the damage was not too remote (ie reasonably foreseeable) The damage must not be too remote in that the type of damage must be reasonable foreseeable. In Wagon Mound it was held the damage was too remote as the sequence of events were not reasonably foreseeable i.e. that welder sparks would ignite a piece of cotton which would blow in the wind and land on some oil and then set it on fire. However, in Hughes v Lord Advocate it was held that as the type of damage was reasonably foreseeable (getting injured by a paraffin lamp) it did not matter if the sequence of events was not. The thin skull rule means that you are responsible for all the consequences of the damage on the person injured as in Smith v Leech Brain where an employee was burnt on the lip with molten metal which triggered a latent cancer from which he died. The factory was liable for the entire extent of the injuries. Assuming the D is negligent outline how the court will award damages to the claimant Outline the process of making a claim Outline the track and court that this case will be allocated Outline the routes of appeal from each track. ...read more.