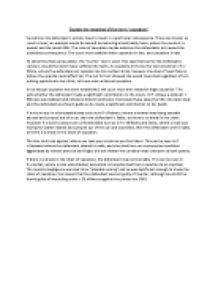 Explain the meaning of the term &quot;causation&quot;

﻿Explain the meaning of the term ?causation? Sometimes the defendant?s actions have to result in a particular consequence. These are known as result crimes; an example would be assault occasioning actual bodily harm, where the conduct is assault and the result ABH. The rules of causation decide whether the defendants act caused the prohibited consequence. The court must establish both causation in fact, and causation in law. To determine factual causation, the ?but for? test is used. This says that but for the defendants conduct, would the victim have suffered the harm. ...read more.

Once factual causation has been established, the court must then establish legal causation. This asks whether the defendant made a significant contribution to the injury. In R v Blaue a Jehovah ?s Witness was stabbed and refused a blood transfusion, that would have saved her life. She later died, and the defendant was found guilty as he made a significant contribution to her death. If a victim acts in a foreseeable way such as in R v Roberts, where a woman was being sexually abused and jumped out of a car, then the defendant is liable, as there is no break in the chain. ...read more.

If there is a break in the chain of causation, the defendant may not be liable. This can be seen in R v Jordan, where a man was stabbed, and whilst in hospital died from a reaction to an injection. The medical negligence was said to be ?palpably wrong? and so was significant enough to break the chain of causation, this meant that the defendant was not guilty of murder, although could still be found guilty of wounding under s.18 offences against the person act 1861. ...read more.