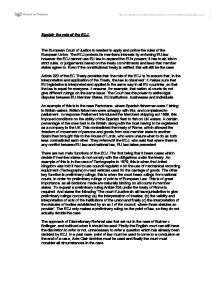 Explain the role of the ECJ.

Explain the role of the ECJ. The European Court of Justice is needed to apply and police the rules of the European Union. The ECJ protects its members interests by enforcing EU law, however the ECJ cannot use EU law to expand the EU's powers; it has to abide to strict rules, or judgements based on the treaty commitments and laws that member states agree to. Even if the constitutional treaty is ratified, this will still be the case. Article 220 of the EC Treaty provides that the role of the ECJ is 'to ensure that, in the interpretation and application of the Treaty, the law is observed.' It makes sure that EU legislation is interpreted and applied in the same way in all EU countries, so that the law is equal for everyone. It ensures, for example, that national courts do not give different rulings on the same issue. ...read more.

The first being that it hears cases which decide if member states do not comply with the obligations under the treaty. An example of this is in the case of Tachographs in 1979, this is when the United Kingdom was told it had to use council regulation on the use of mechanical recording equipment (Tachographs) in road vehicles used for the carriage of goods. The other key function is preliminary rulings; this is when the court hears rulings from national courts, in order for preliminary rulings of points of European Law. This is of great importance, as all decisions made are naturally binding on all courts in member states. To request a preliminary ruling Article 234 under the treaty of Rome is required. And states the following "The court if Justice shall have jurisdiction to give preliminary rulings concerning: (a) the interpretation of treaties; (b) ...read more.

It has a total of 12 judges, of which there can be panels of six, four or three judges. There is 27 of the EU's national legal systems are represented. The Court is assisted by eight 'advocates-general' whose role is to present reasoned opinions on the cases brought before the Court. They must do so publicly and impartially. The Court may meet in plenary session, or create chambers of three or five judges. Only a single judgement is delivered in each case, signed by all judges, without any differing opinions. Therefore, all decisions are both unanimous and anonymous, preventing any attempt to attribute the result to the nationality of the judges deciding A newly introduced structure to the European courts by the treaty of Nice is the creation of specialised judicial panels. Allowing for the creation of specialised tribunal's means it is now possible, following a practice in the Member States, that a specialised EU tribunal could be created to deal with disputes in the field of employment and industrial relations. ?? ?? ?? ?? ...read more.