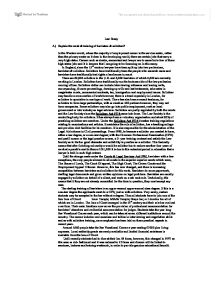 Law Essay A) Explain the work & training of barristers & solicitors? In the Western world, where the majority of employment occurs in the service sector, rather than the primary sector as it does in the developing world, there are certain jobs that carry a very high status. Careers such as doctor, accountant and lawyer are to name but a few of these high status jobs and it is lawyers that I am going to be focussing on in this essay. In England, since the 15th century lawyers have been split up into two professions, barristers & solicitors. Solicitors have traditionally been the people who research cases and barristers have traditionally had rights of audiences in court. There are 60,000 solicitors in the U.K. and 6,000 barristers of which 4,000 are currently working in London. Solicitors have traditionally run the business side of the law profession running offices. Solicitors duties can include interviewing witnesses and issuing writs, conveyancing, divorce proceedings, drawing up wills and last testaments, advocates in magistrates courts, commercial contracts, tax, immigration and employment issues. Solicitors may handle a cross-section of work however; there is a trend especially in London, for solicitors to specialise in one type of work. There has also been a recent tendency, for solicitors to form large partnerships, with as much as 100 partners however, they may not form companies. ...read more.

Finance is also a major obstacle for a working class person with ambitions to become a lawyer and this is obviously a major factor in the majority of lawyers coming through being middle class. Also, the legal profession is changing drastically with the Courts & Legal Services Act 1990, giving solicitors with the qualifications, the rights of audience in the higher of courts, and that is going to be the topic of debate in my next essay. B) Discuss whether there should be a single legal profession? After the passing of the Courts and Legal Services Act 1990, the legal profession and the role of lawyers and solicitors has been heavily scrutinised. This is due to the fact that many believe that, there is no longer a need for two separate arms of the legal professions as solicitors now have the rights of audience, therefore eradicating, the need for barristers as solicitors are able to carry out barristers duties and therefore, moving towards a unified legal system as they have in many other countries such as America. In this essay, I will be discussing the main advantages and disadvantages of the merging of the two professions and, will be concluding with my own opinion. The last 13 years, have seen a major move towards the merging of the two legal professions. ...read more.

However, before this does eventually happen, I believe a lot of factors will have to be taken into consideration. I think clients, should not no whether their lawyer was a former practising barrister or solicitor. I think they are going to have to input mechanisms into the legal system to ensure working-class people who cannot afford fees should be heavily subsidised and, that there are also many 'new' jobs created within the legal profession where people, who may not have degrees, are bought into help out with the administration and presentation of cases and eventually through gaining insight and experience in the legal profession as a whole are given honorary degrees to practice law after say fifteen years service. However, even if the, two professions don't merge I still think there has to be structural changes to even out the legal profession. As it seems strange that 2500 more people have joined the bar even though solicitors have basically the capabilities to do the same job as barristers. I think judges should have to respect solicitors who have gained rights of audience; I think the tests for solicitors to be given rights of audience should be made easier and that solicitor's salary be raised in line with barristers to entice people to become solicitors. By Daniel McIntosh ...read more.