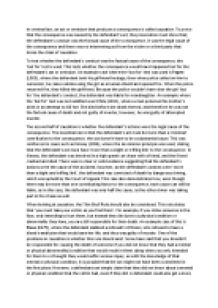 Explain what is meant by the term 'causation' in criminal law and assess how the courts have interpreted its significance in determining criminal liability.

In Deer, the defendant should only have been guilty for the initial injuries, as the victim should not have made the wounds worse and sought medical treatment to save their own life. A chain of causation can be broken by an intervening act. An intervening act can be; an act of a third party, the victim?s own act or a natural but unpredictable event. An intervening act is defined as an act that sufficiently separates the defendant?s conduct from the consequence. However, there are some acts, such as medical treatment that are unlikely to break the chain of causation. This is to stop doctors or surgeons from not performing operations that could render them criminally liable if they make a mistake. This was proven in the cases of Smith (1959) and Cheshire (1991). In Smith, two soldiers were fighting and one was wounded. He was taken to a medical centre and given artificial respiration, but this only made the wound worse, and then the victim died. It was ruled that the defendant?s act was an ?operating and substantial cause of death? and thus was guilty of murder. The phrase ?operating? is used here as the wound was still there when the victim died. However, in Cheshire, the victim was shot and the wound had healed up before he died. The victim had died from complications due to the tracheotomy he had received, however, the defendant was still liable for his death, as it was a ?significant? cause of death. ...read more.

For example, whereas a defendant will not be liable for injuries caused by the victim jumping out of a window simply because the defendant shouted abuse at the victim, the courts should still treat the abuse as a separate crime, and in this case, the defendant would be convicted of common assault, as he placed the victim in a state of fear. To conclude, the courts can interpret the law effectively in a majority of cases to ensure justice is upheld. This is shown in cases of Smith, Cheshire, Jordan and Pagett, where all who were liable were very much guilty in the eyes of morality and common sense. There are also sufficient tests in place, such as the ?but for? test and the ?Daftness Test?, that look at the actions of both the defendant and the victim to judge where liability lies and if the victim acted unreasonably, or if a consequence would have occurred even if the defendant did not commit the act. However, there are also cases where defendants are made liable for crimes they shouldn?t be, shown in the cases of Blaue and Deer. It is quite obvious the courts are attempting to make defendants liable in the name of safety, as the courts could be criticised by people of certain beliefs if they let people ?get away? with certain crimes, even if the defendant?s incompetence resulted in the consequence. So though the courts are capable of interpreting the law in order to make the correct people liable, it could be said they are too aggressive in convicting, and do not consider intervening acts as considerably as they should. ...read more.