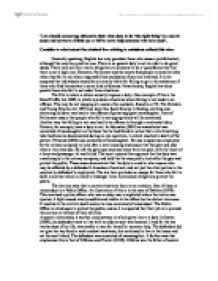 Law should encourage citizens in their civic duty to do the right thing(TM) in a moral sense and not turn a blind eye or fail to act to help someone who is in need(TM). Consider to what extent the criminal law r

'Law should encourage citizens in their civic duty to do 'the right thing' in a moral sense and not turn a blind eye or fail to act to help someone who is in need'. Consider to what extent the criminal law relating to omissions reflects this view. Generally speaking, English law only punishes those who cause a prohibited act, although this may be a positive one. There is no general duty to act in order to do good deeds. There may well be a moral obligation on someone to be a 'good Samaritan' but there is not a legal one. However, Parliament and the courts find people criminally liable when they fail to act where responsibilities and duties of care are involved. It is not accepted that individuals should be criminally liable for failing to go to the assistance of those who find themselves in some kind of distress. Nevertheless, English law does punish those who fail to act under three situations. The first is where a statute actually imposes a duty. One example of this is the Road Traffic Act 1988, in which lays down situations where failing to act leads to an offence. This may be not stopping at a scene of an accident, found in s.170. The Children and Young Persons Act 1933 also does this. ...read more.

The Public Office is relied upon to protect the public, and so it is expected that their job is to provide this service to the best of their abilities. A special relationship is another circumstance in which gives rise to a duty. In Instan (1893), the defendant went to live with an elderly aunt who became ill and for the last twelve days of her life, was unable to care for herself or summon help. The defendant did not give her any food or seek medical assistance, but continued to live in the house and eat the aunt's food. The defendant was convicted of manslaughter. A further case that emphasises this is that of Gibbons and Proctor (1918). Gibbins was the father of several children. There was evidence that his partner, Proctor, hated his 7-year-old daughter and had hit her. They both kept her separate from the others and deliberately starved her to death. They were both convicted of murder as Gibbins owed her a duty as a father and Proctor was held to have undertaken a duty to her. Both of these cases ensure that family relationships do owe a duty of care. However in Khan and Khan (1998), the convictions of manslaughter were quashed. ...read more.

Both of these cases show that the law does in fact promote citizens to act morally, but only in situations whereby they have caused the danger. It is generally believed that non-fatal offences against the person cannot be caused by an omission. In Fagan V MPC (1969) the court had to be creative in order to find the defendant guilty of battery. He was directed to park a car by a police officer and drove onto his foot. The policeman insisted that he got off but the defendant refused and said "fuck you, you can wait". He switched off the engine but eventually reversed off slowly after the victim repeated his request. The prosecution were satisfied that he "knowingly, provocatively and unnecessarily allowed the wheel to remain on the foot", and so he was convicted. It is apparent that the English Legal System does encourage the public to act dutifully to some extent. It seems that an omission can only occur where a statute imposes a duty, there is a contractual duty to act and in certain situations where the law states that an omission is an offence. These situations, however, are limited and only really involve circumstances where there is an evident responsibility. The law does not expect citizens to intervene and help strangers as such who are need. ?? ?? ?? ?? ...read more.