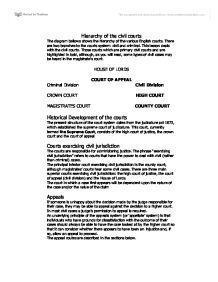 Hierarchy of the civil courts

The diagram bellows shows the hierarchy of the various English courts. There are two branches to the courts system: civil and criminal. This lesson deals with the civil courts. Those courts which are primary civil courts and are highlighted in bold, although, as you will read, some types of civil cases may be heard in the magistrate’s court.

Historical Development of the courts

The present structure of the court system dates from the judicature act 1873, which established the supreme court of judicature. This court, currently termed the Supreme Court, consists of the high court of justice, the crown court and the court of appeal

The courts are responsible for administering justice. The phrase “exercising civil jurisdiction” refers to courts that have the power to deal with civil (rather than criminal) cases.

If someone is unhappy about the decision made by the judge responsible for their case, they may be able to appeal against the decision to a higher court. In most civil cases a judge’s permission to appeal is required.

An underlying principle of the appeals system (or ‘appellate’ system) is that individuals who have grounds for dissatisfaction with the outcome of their cases should always be able to have the case looked at by the higher court so that it can consider whether there appears to have been an injustice and, if so, allow an appeal to proceed.

The appeal routes are described in the sections below.

The judges who preside over the proceedings in county courts are circuit judges appointed by the crown on the advice of the Lord Chancellor, following selection by the judicial appointments commission. They must be barristers of at least 10 years, with busy courts in urban areas having a number of joint district judges

Examples of cases heard in the county courts include

Since the implementation of the Woolf Reforms (which resulted from Lord Woolfs Access to justice reports 1996), civil cases are assigned to one of three ‘tracks’ according to their value. Cases where the value of the claim is expected to be £15,000 or less (or, in the case of a personal injury claim, less than £50,000) are usually heard in the county court

They also deal with questions concerning the residence and adoption of children and the giving of permission for persons under 18 to marry where they cannot obtain their parents consent. Domestic proceedings are dealt with in separate branches of the magistrates’ court known as the family proceedings court and family panels- see s.92 and schedule II of the CHILDREN ACT 1989.

In civil cases, appeal from magistrates’ courts usually lies to a divisional court of the family division of the high court.

Under s.4 of the Supreme Court act 1981, as amended by the constitutional reform act 2005, the high court consists of the lord chief justice, the heads of the three divisions and not more than eighty-five puisne judges of that court, known as justices of the high court. The number of puisne judges may be increased by orders-in-council. The qualification is that of at least ten years as a barrister.

As mentioned, the high court is divided into three divisions, although this division is only for administrative purposes and the number of divisions may be increased or reduced by order-in-council.

Appeal lies from the high court to the court of appeal.

The court of appeal (civil division), which sits under the presidency of the mater of rolls, hears appeals from cases tried before the high court or the county courts. Appeals can be based on matters of law, fact or both. The court may uphold or reverse the decision of the lower court or substitute another judgement. It may order a new trial in a proper case.

Appeal, which is usually only considered on points of law of public importance, lies from the court of appeal to the House of Lords.

The house of lords was not included in the supreme court of judicature. However, its jurisdiction as a final court of appeal was restored by the appellate jurisdiction act 1876, which also provided the house with professionally qualified judges. The house of lords is the highest element of the English legal system, although in matters of European law it must accept and apply the rulings of the European court of justice. The house of lords exercises its judicial function through a committee of the house composed generally of five lords of appeal in ordinary (or law lord). It only hears appeals.

The court of justice of the European Union

The court of justice of the European Union (the European court) ensures the observance and recognition of community rules with regard to legal interpretation and application. It is concerned with disputes between member countries, individuals and the EU institutions on matters relating to the treaties, and its rulings are binding. The court is the final arbiter in all matters of law that lie within the scope of the treaties.

The court of justice consist of 15 judges and is assisted by advocates-general whose duties are to present publicly, with complete impartiality and independence, reasoned conclusions on cases submitted to the court with a view to assisting the latter in performance of its duties.

Judges and advocate general are chosen from among persons of indisputable independence who fulfil the conditions required fro the holding of the highest judicial office in their respective countries or who are jurists of recognised competence.

Alternatives to the ordinary civil courts

As we have seen, criminal problems are dealt with by the state through criminal courts. However, for civil disputes, citizens also have access not only to the civil courts but to some alternatives.

The first alternative to develop came by way of administrative tribunals. Tribunals are set up by parliament and deal with specific areas of law. They are similar to the courts in that both sides present their arguments in a case and a decision is reached by a third party (in this case The true alternatives to the civil courts are the methods of disputes resolution which have been developed under the heading of ADR – alternative dispute resolution. Theses methods are arbitration, conciliation and mediation.

As seen in the diagram below

Under the tribunals and inquiries acts of 1958, 1971 and 1992, many disputes at the present day are adjudicated upon, legal rights determined by, people or bodies falling outside what are traditionally called the ordinary courts. Parliament has in recent years increasingly conferred on tribunals the power of making decisions that may affect private rights. These tribunals, which are outside the ordinary judicial system, are not for the most part staffed by lawyers, though most of them have legally qualified chairmen. Chairmen undergo training which is organized by the judicial studies board.

Tribunals are usually made up of a panel of three individuals. In addition to the chairman there will be two lay (i.e. not necessarily legally qualified) members who will have some experience of the particular area that the tribunal covers.

People who appear before tribunals do not have to be represented by a member of the legal profession. Depending on the nature of the tribunal, they may instead choose to be represented by, for example, a trade union official, an accountant, a surveyor, a doctor, a social worker or a friend, or they might want to represent themselves.

Tribunals are an important part of the justice system. They handle more cases each year than the ordinary civil courts and often involve the most vulnerable people in our society.

In 2007 there were 21 central government tribunals. Administrative support for the tribunals is provided by the tribunal service. Which is an executive agency of the ministry of justice? Different tribunals deal with different types of problem. Here are some examples

Appeals from tribunals, where permitted, may be heard in the high court or the court of appeal.

Tribunals have themselves recently been subject of a far-reaching report (the Leggattt report), which has made a number of recommendations.

Judicial control is initially exercised by the right of appeal provided by the tribunal and inquiries act 1971. In addition, the courts have the power of review based on the common law power of the Queen’s Bench division to examine the extent and mode of exercise of the powers of tribunal.

Arbitration is where the two sides to a dispute agree to submit their dispute to an ‘independent third party’, the arbitrator will ‘impose a solution’ on parties which is to be binding. (You will see how this differs from the role of the independent thirdin mediation and conciliation)

ACAS (the arbitration and conciliation service), is a well known organisation that specialises in arbitration within the field of employment relations.

Arbitrations are often used where there are collective disputes, perhaps between a workforce and the organisation that employs it. For example, if a trade union is considering calling for a strike action because agreement with an employer over a particular issue cannot be reached, the trade union and the employer may agree that an independent arbitrator, probably from ACAS, is called in.

Many contract feature an arbitration clause (known as a Scott v Avery clause), with both parties to the contract agreeing in advance that any future unresolved disputes will be referred fro arbitration.

Arbitration is similar to the court process in that each side puts forward their own argument and evidence, and, as mentioned above the arbitrator’s decision is binding.

There is no automatic right of appeal and, if a point of law is t issue, the case may not be suitable for hearing before an arbitrator

Typically, one side will approach the other with a problem. The other side will then respond, stating their potion. In a series of exchanges the two parties will attempt to reach a compromise solution that both sides can agree to. If no agreement can be reached then one of the other methods mentioned above may be perused. Failing that, litigation may be necessary. However, even where litigation has been started, it should be noted that most cases are settled through negotiation before the case comes to trial.